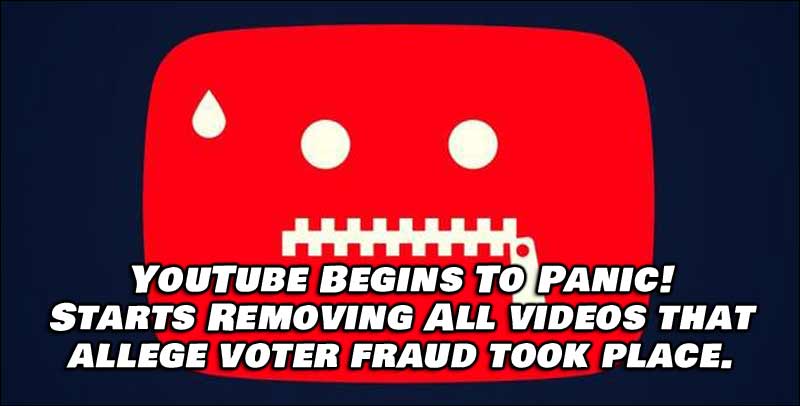 You better ‘check yourself’ next time you go to post a video on YouTube about the recent cases of Voter Fraud that took place in the 2020 Presidential Elections. According to Bloomberg News, the Big Tech video giant YouTube will start to remove any and all videos that they believe to be ‘misleading‘. By that we mean if your video alleges widespread voter fraud, it WILL BE REMOVED. If your video alleges that errors, software glitches or purposeful fraud changed the real outcome of the elections, it will be removed.

YouTube, which is a subsidiary of mommy company Google, just stated that the platform will remove videos claiming President Trump won due to counting errors or software glitches. We’re assuming that even if there is evidence to back up your video, YouTube will STILL remove it based on the wording of their new ‘rule’.

YouTube said this in a statement, “Yesterday was the safe harbor deadline for the U.S. Presidential election and enough states have certified their election results to determine a President- elect.” .. So YouTube is now telling you who won the 2020 Presidential election. YouTube is confirming who won the 2020 Presidency … Yes, you read that correctly. What they are NOT telling you, is that there is on-going litigation that DOES OVER-RIDE any certification (until the litigation is over, of course).

So far, YouTube has stated that they have already “terminated over 8,000 channels and ‘thousands of misleading elections-related videos’ for violating preexisting policies. Over 77% of those were automatically removed before they had 100 views.”

YouTube went as far as to suspend the account of OAN News Network, a very popular news outlet for conservatives. YouTube completely shut down the monetization of the channel, which means OAN would not longer be receiving what used to be their share of the revenue their videos brought in. They were also blocked for one whole week from posting any new videos at all.

That same day, it just happened that Democratic Senators requested to YouTube that they take down all ‘election misinformation’ related videos.

Let us know your opinions in the comment area below.