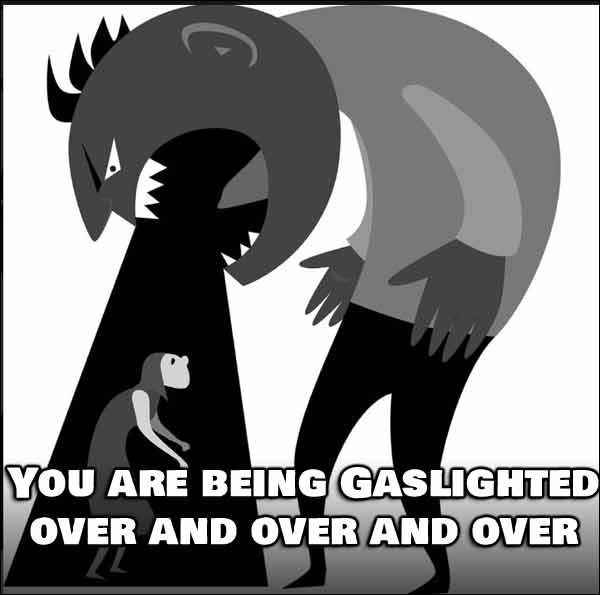 If you haven’t caught on yet, you’ve been gaslighted over and over and over again by the Left and the Media. What exactly is Gaslighting? The word stems from the act of “the systematic psychological manipulation of a victim by her husband in Patrick Hamilton’s 1938 stage play Gas Light“. The film also had adaptations released, one in 1940 and the other in 1944. In the story, the husband tries to convince his wife (along with others) that she is insane. He does this by manipulating small elements of their environment and then insisting that she is mistaken, or she’s remembering things incorrectly, or delusional when she points out these changes. The play’s title hints to how the abusive husband slowly dims the gas lights in their home, while pretending nothing has changed. This is his attempt to make his wife doubt her own perceptions. Again and again the wife questions her husband to confirm her perceptions about the dimming lights, but to keep her out of reality, he keeps insisting that the lights have not changed at all and that she may be going insane. The method of gaslighting has proven to work, that is why it is used by many in their attempt to control other people.

Today we are living in a perpetual state of gaslighting . The reality that we are being told by the media is at complete odds with what we are seeing with our own two eyes. And when we question the false reality that we are being presented, or we claim that what we see is that actual reality, we are vilified as racist or bigots or just plain crazy. You’re not racist. You’re not crazy. You’re being gaslighted.

New York State has twice as many deaths from Covid-19 than any other state, and New York has accounted for one fifth of all Covid-19 deaths, but we are told that New York Governor Andrew Cuomo has handled the pandemic better than any other governor. But if we support policies of Governors whose states had only a fraction of the infections and deaths as New York, we’re called anti-science and want people to die. So, we ask ourselves, am I crazy? No, you’re being gaslighted.

We see mobs of people looting stores, smashing windows, setting cars on fire and burning down buildings, but we are told that these demonstrations are peaceful protests And when we call this destruction of our cities, riots, we are called racists. So, we ask ourselves, am I crazy? No, you’re being gaslighted.

We see the major problem destroying many inner-cities is crime; murder, gang violence, drug dealing, drive-by shootings, armed robbery, but we are told that it is not crime, but the police that are the problem in the inner-cities. We are told we must defund the police and remove law enforcement from crime-riddled cities to make them safer but if we advocate for more policing in cities overrun by crime, we are accused of being white supremacists and racists. So, we ask ourselves, am I crazy? No, you’re being gaslighted.

The United States of America accepts more immigrants than any other country in the world. The vast majority of the immigrants are “people of color”, and these immigrants are enjoying freedom and economic opportunity not available to them in their country of origin, but we are told that the United States is the most racist and oppressive country on the planet, and if we disagree, we are called racist and xenophobic. So, we ask ourselves, am I crazy? No, you’re being gaslighted.

Communist countries killed over 100 million people in the 20th century. Communist countries strip their citizens of basic human rights, dictate every aspect of their lives, treat their citizens as slaves, and drive their economies into the ground, but we are told that Communism is the fairest, most equitable, freest, and most prosperous economic system in the world. So, we ask ourselves, am I crazy? No, you’re being gaslighted.

The most egregious example of gaslighting is the concept of “white fragility”. You spend your life trying to be a good person, trying to treat people fairly and with respect. You disavow racism and bigotry in all its forms. You judge people solely on the content of their character and not by the color of their skin. You don’t discriminate based on race or ethnicity. But you are told you are a racist, not because of something you did or said, but solely because of the color of your skin. You know instinctively that charging someone with racism because of their skin color is itself racist. You know that you are not racist, so you defend yourself and your character, but you are told that your defense of yourself is proof of your racism. So, we ask ourselves, am I crazy? No, you’re being gaslighted.

Gaslighting has become one of the most pervasive and destructive tactics in American politics. It is the exact opposite of what our political system was meant to be. It deals in lies and psychological coercion, and not the truth and intellectual discourse. If you ever ask yourself if you’re crazy, you are not. Crazy people aren’t sane enough to ask themselves if they’re crazy. So, trust yourself, believe what’s in your heart. Trust your eyes over what you are told. Never listen to the people who tell you that you are crazy, because you are not, you’re being gaslighted.

Sophocles said: “What people believe prevails over the truth.” And that’s what the media are trying to exploit.

If you have read this far let me say one thing. I did not write the above and I am not sure who the author is.

I post this here because you are hopefully smart enough to understand what is being done to you on a daily basis from many directions. I do not care about your political party affiliation. Just think through what you are being told. Don’t listen with a deaf ear, or see with a blind eye. Question everything — even things from people who you think you can trust. Question why you are being told whatever, by whoever. Question their motives. Question who benefits. Question if there is a hidden agenda behind the propaganda. Question, Question, Question. Then do your own research, and use some of your own critical thinking skills to get to the truth. Listen with your heart and with your mind.

Sadly, 95% of the masses don’t even know that they are being gaslighted . At least now you do.

If this makes sense to you, then forward to your friends who you think might “get it”. Also, feel free to leave a comment below.

enjoyed, appreciated this truth (to me)

Very good article. It is kind of long for the brain washed. But it is exactly what is going on. I’m not paying any Gaslighting any attention. We need to focus one the main thing. ELECTION FRAUD.
Any and all Gaslighting can be halted by just saying, It doesn’t matter because Biden STOLE THE ELECTION. HE NEEDS TO BE PROSECUTED NOW