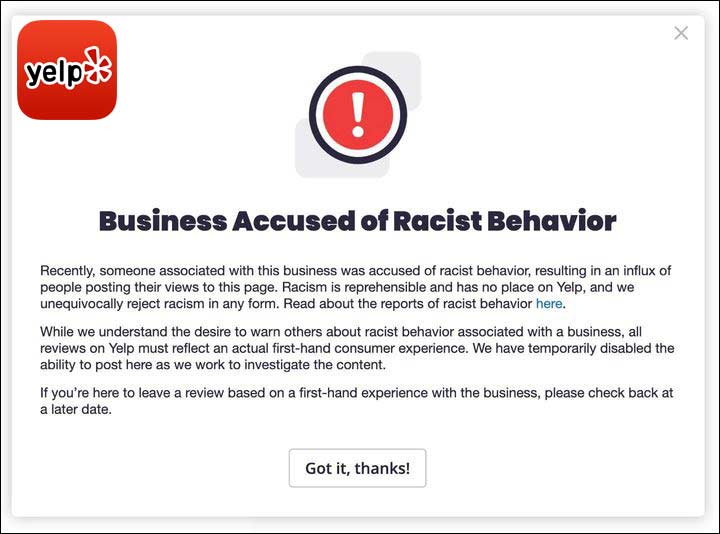 YELP decides to Get Woke, hopefully they’re next to Go Broke. Honestly, I have never seen such a disgraceful decision made by a business that relies on ‘the power of the people’ to exist; Meaning that if people did not populate the Yelp site with information, Yelp would be nothing. Yelp would be non-existent. Yet they just recently made the decision to allow people to (without an ounce of proof) to point a finger at a business or service, and say they did something racist. Yelp in return will (with no fact checking) then label that business as exhibiting racist behavior.

With the ‘cancel culture’ being what it is today, we’ve seen countless individuals and businesses get fingers pointed at them baselessly, usually because of a political stance or point of view. From what we’ve personally seen, much of it was baseless but was acted upon because of a difference of views on subjects such as race, President Trump, political affiliation, or which ever topic is hot at the moment. Since we’ve already seen all that in action, this Yelp decision easily leaves the door open for ‘mass bombardment’ against a business solely based on what starts out as one single person’s personal opinion. Since Yelp will NOT be doing any ‘fact checking’ with the accusations, a single person can take a dislike to a business for any reason at all, make a baseless accusation of racism, which could easily explode into ‘mob mentality’. Remember the Christian Baker who refused to bake a cake for a same sex wedding? This leaves the door open for that but on a much worse level.

Let’s say you, the you reading this, choose to ‘hurt’ a business for whatever reason you choose. You can easily talk to a few friends, convince them to do you a favor, and you all jump on Yelp and say that you experienced racism from a certain business. Others will see that and some will always follow suit and leave similar accusations, even though they never happened. It’s just human nature and we’ve already seen it in the times of digital social media. It’s ‘mob mentality’. You can easily put a hurting on any business you choose. You can potentially shut down any business you choose. You can have bogus lawsuits come up against any business you choose. In turn, logically you’d figure businesses would then decide to NOT be listed on Yelp, solely because the ease that exists for someone to come along and red flag you. Yelp would experience an influx of requests from business owners to have their listings removed from Yelp. Not a bright idea ladies and gentleman. That is why we say Get Woke, Go Broke. …. Do you have an opinion on Yelp’s decision to do this? Please comment below.

Good job Yelp! Thanks for being part of the problem! Are you guys idiots or what? I predict there will be no more Yelp, let’s say, in less than 3 months. Then Yelp will need Help! Hey, look at that, I’m a poet and didn’t even know it!

How do you accuse people of being racist on Yelp? I want to accuse Yelp of being racist. Not one of their members on their board of Directors is black.

This is the dumbest thing I’ve ever heard! Now, anyone who gets pissed at a business for ANYTHING can label it “racist” and possibly destroy its reputation! I’m so sick and tired of this ‘woke” shit!!!!