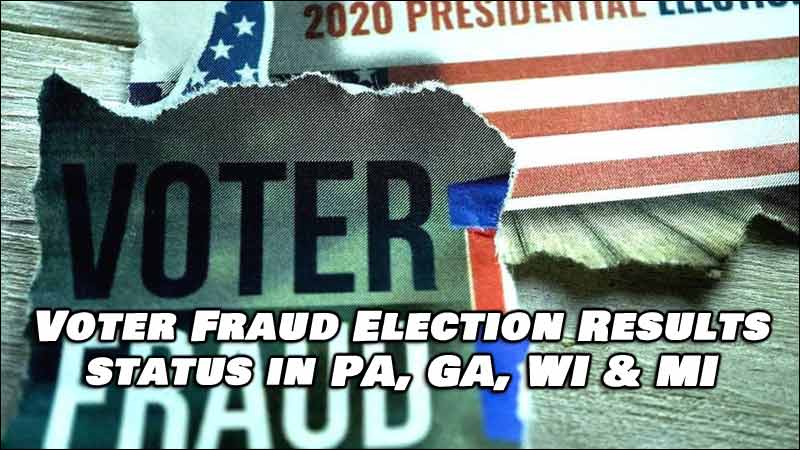 Wow, it’s been quite a week for the Presidential Election results. The constant shoving down our throats that Joe Biden is the President Elect by the MSM, Social Media and Big Tech. The Sidney Powell ‘release the Kraken’ moments. The GSA preparing transition for Biden as President (done with purpose to get Biden to disclose relationships with other leaders). The Pennsylvania open public discussion from Rudy Giuliani and Trump’s legal team, with witnesses and sworn testimonies. Judge stops election certification in Pennsylvania. Now we are beginning to hear of massive provable voter fraud in Nevada (which is not included in the below list).

Being that so much has happened, along with the constant twisting of stories by the media, we figured we’d break down the status of each major state’s voter fraud claims. It does get a bit confusing trying to stay on top of it all, but we are doing our best.

This past Wednesday, the Republicans that make up the Pennsylvania legislature, met up with Rudy Giuliani and the rest of Trump’s legal team. They held a rather long open public hearing which was located at a Gettysburg hotel. Multiple witnesses testified via Zoom. They spoke of the election fraud and illegalities they witnessed. Both Rudy Giuliani and Jenna Ellis (both from Trump’s legal team) answered questions and brought up facts. Giuliani was asked by state senators how he would personally handle things moving forward. Rudy stated he would remove all the illegal and fraudulent votes, do a recount of all legal votes, that will tell the REAL winner. Then investigate and prosecute the people responsible for the criminal acts committed. Cheers erupted from the audience watching.

This open hearing was huge in at least 2 ways. First, it was the beginning of proving proof to the American People that voter fraud 100% did take place during the 2020 Presidential Elections. By providing that proof, this will motivate Americans that were on the fence, to stand up for action to be taken. More Americans will now demand justice. Second thing it did was give the power to the legislature to act. With out any proof, there would have been nothing they could have done to the election results. Now that undeniable proof exists, they legitimately can take action; The Right Action. The state legislature is supposed to prevent “scandal, intrigue, and corruption” during the Presidential Elections. We hope now that they do their jobs.

Other than that in Pennsylvania, a hearing will take place on the 27th to discuss the suspended certification of the election results.

The appeal by Trump’s legal team for the denial of the injunction (for votes to be audited) was declined by the Michigan Supreme Court. However, it wasn’t a ‘complete’ denial which means it’s not officially final, but it was still ‘denied’. Plaintiffs STILL have the chance to fight to have the votes audited (verified via multiple methods). Presently, the Michigan Supreme Court has a Republican majority, which is good for Trump. But beginning January 1st, 2021, that majority flips to the Democrats, so in Michigan, things need to be addressed rather quickly.

Wisconsin definitely has voter fraud issues. Numbers just do not add up. 2 counties there (Milwaukee and Dane) are ‘supposedly’ STILL counting votes, many of which are being argued over by Trump’s team as not qualified to be counted. Missing signatures, incomplete forms, multiple identical signatures, are just some of the issues being reported. Republicans can easily step in and challenge, but experts think litigation in court over illegal ballots is the way to handle this state. After the present recount, Trump will probably take this to litigation. As of right now, only about 20,000 votes separate Biden and Trump.

Georgia seems like it is right now in the hands of Sidney Powell. We know she filed her lawsuits there just a day ago. We reported on it, and have a copy of the official legal complaint here which will break down exactly what she is suing over (MASSIVE VOTER FRAUD).

Do you have any opinions about the above?? … If so, please feel free to comment below.

I hope our legal system operates as it was intended to!

AMEN!! This must go to the Supreme court as the lower state supreme courts are TAINTED with BIAS!

MANY of us want to know WHAT is being DONE to ensure the integrity of the GA 2021 Senate runoff. NO ONE is talking about that VERY IMPORTANT thing.