What’s Next? Are We Headed For Martial Law?? Are Military Tribunals coming?

What’s Next? Are We Headed For Martial Law?? Are Military Tribunals coming? 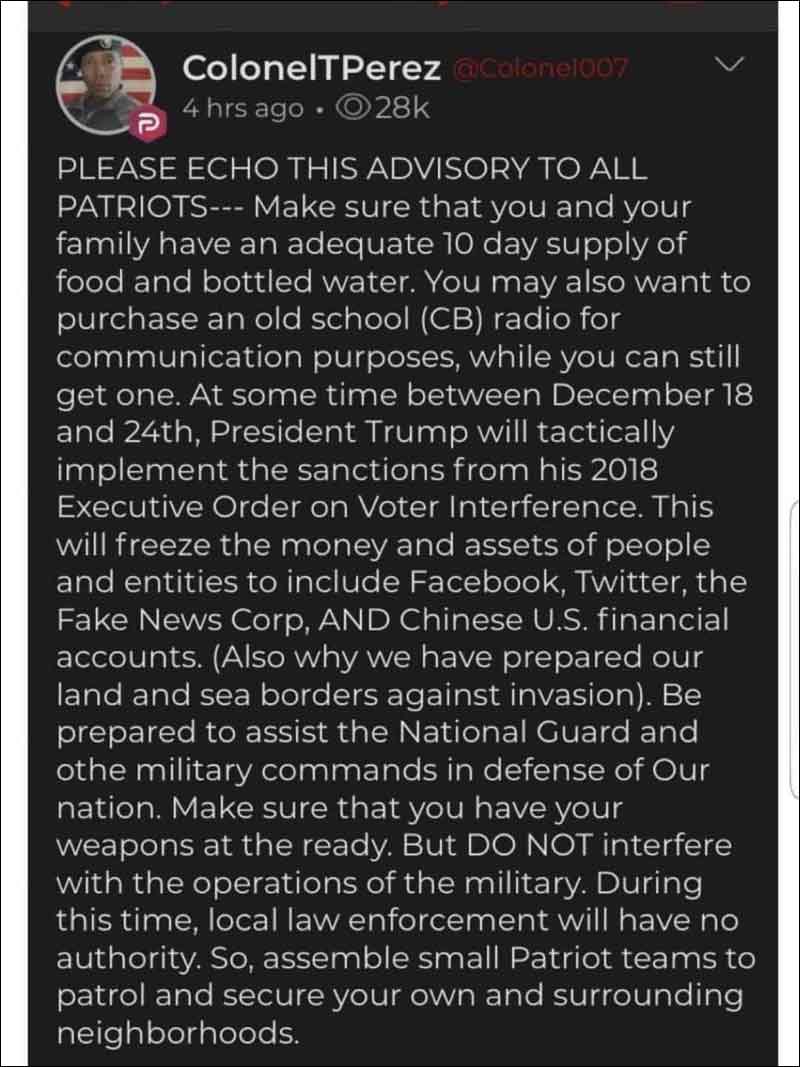 What’s Next? Are We Headed For Martial Law?? Are Military Tribunals coming? (Click for full size)

The gloves are off. With all the recent happenings with the 2020 Presidential Election, and the results, it’s time to take the gloves off. Yesterday was the last straw when states’ electoral votes were cast (even among all the claims and evidence of MASSIVE voter fraud) and Joe Biden eventually took to the stage to make his ‘Acceptance Speech’, if that’s what you want to call it. The Left is RAMMING it down our throats that Joe Biden won, when we all know that he did not, and that there was massive cheating that took place. Between the Dominion voting machines, the ballot counting software, the millions of illegally printed ballots; But the Left, and the Media just keep trucking along as if it’s over and Joe Biden won cleanly.

I personally believe that Trump has now taken off his gloves. He tried to be Mr Nice Guy, and do things the correct way. Bring his complaints into the courts, and get a fair hearing … But that did not happen. So no more Mr Nice Guy.  … But what are Trump’s options at this point? As of today, what can Trump still do to save our election process’ integrity? And set things right from the recent 2020 Presidential Elections?

First thing is he needs to act fast. I’m sure you’ve already heard about the 2018 Executive Order that Trump signed which gives any President up to 45 days to show proof of Foreign Interference on an American Election, and gives that President massive power to go and grab up all the evidence (Insurrection Act). Once the evidence is gathered and compiled, it’s time for court … But not regular court. Not a lower level court that is headed by an Obama appointed judge. This goes to Military Tribunals. In a military court, things are very different than where Trump has taken this already (and was pushed out). Trump can pull ANYONE into the charges, even the US Media. There’s no doubt that they contributed mis-information and lies. They undoubtedly did their part to help the Left (and the CCP) accomplish their goals. They all need to be held accountable.

So with these Military Tribunals, Trump can prove the fraud. He can then remove the fraud from the ballot equations (vote tally). We can all then see the REAL results of the election and a REAL winner can be declared.

There have been rumors that when this happens, Trump will bring in the National Guard, declare Martial Law, and allow the Military to go do it’s thing in obtaining all the evidence, and finding the people who are going to be charged. (And also keep the rioters at bay). See the attached Parley (Pic above) from a ‘supposed’ Colonel T Perez to hear his vision of what is on its way.

What do YOU think will happen? Please let us know in the comments.

I believe that POTUS Trump SHOULD invoke the insurrection act. Americans have seen on almost every level of our court systems all the way to the Supreme Courts that there are corrupt people that have sold America out to China. The Scriptures tell us, “For the love of money IS the root of all evil” This can be plainly seen in almost every corner of our country. The best way in MY opinion is to invoke the insurrection act and allow the military to take over and either remove the fake and fraud votes or have a new vote which… Read more »

What does scripture say about love of power because it is not just the love of money but power and ruling over us that motivates Joe and his ilk, as well.

and this does not motivate President Trump? You honestly believe that it’s different?

Every LEGAL means of pursuit must be exhausted FIRST. If we are to claim that our cause is righteous we MUST do things “by the book.” Then the Insurrection Act must be invoked followed by martial law. What this has shown us is just how deep, how badly our institutions are corrupted. The FBI who has and as far as I know are doing NOTHING in terms of REAL investigation. The DOJ where Barr has slow-walked everything in the actions of the DS to destroy the Trump presidency. He HID an investigation of Biden on corruption and said NOTHING when… Read more »

sources on your “IRON CLAD EVIDENCE”. All caps doesn’t make it true.

I agree with getting the military involved and declaring Marshall Law the sooner the better. Also everyone that has been a part of this rigged election should be punished to the fullest extent of the military law. The President has the support of the patriot people. Never has a President got near the votes as our President Donald J. Trump. We love and support him and his family!! I am retired a army soldier and will fight again if need be.

it’s Martial Law. But anyway: still looking for data on how it was rigged. Also curious as to why only some Americans are patriots in your book. I consider myself a patriot, an am offended that others would deign to call me something else.

Looking for evidence of “MASSIVE voter fraud”. Not found. Please reference your sources, and explain how this would have reversed the election. Also please explain how 2020 fraud incidents are materially different than any in 2016. Just looking for facts that support the claims, otherwise it’s just an opinion.

https://hereistheevidence.com/ I can give you other sources but I have a feeling you’re not looking for reality.