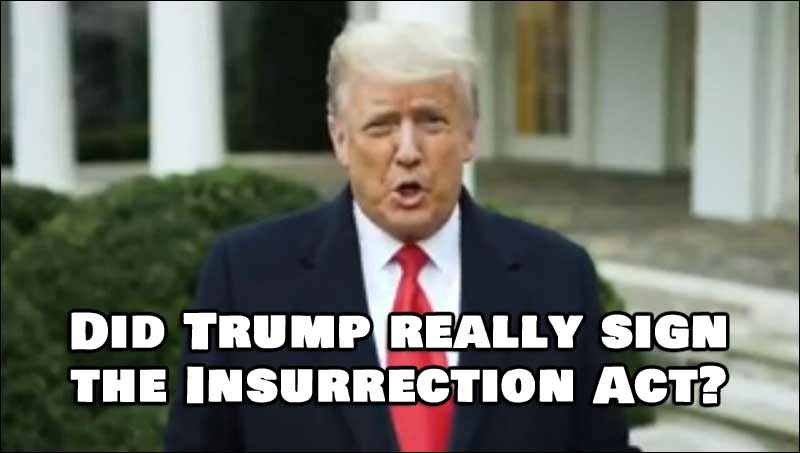 Lots of chatter in the past two days about President Trump signing the Insurrection Act. We still are in the dark about it, listening only to rumors and chatter. However, I do follow one Military Ops dude that seems to always know what he’s talking about. If what he says is true, then the Left are in some very serious trouble, although they are already blowing it off as ‘rhetoric’. However, actions peak louder than words and it seems as if Nancy Pelosi is in complete panic mode to impeach President Trump, even though he only has (allegedly) 9 more days in office. When it comes to the mentioning of The Insurrection Act, I’ve seen every lame excuse by the Left morons that have zero intelligence, including “That was written in the 1800s!” and “That’s NOT what the Insurrection Act is for!” and thus the Left thinks the President can NOT use it. They truly are complete ignorant dumb-asses. They obviously did not even take the time to read it in its entirety. Anyway, the Military Ops person I follow, this was from his Twitter account that got removed yesterday :

Well Patriots – I believe the day we have all been waiting for is now in play.

It is Sunday, January 10, 2021 and one of my very reliable sources has told me he was inbound to Camp Pendleton due to the Insurrection Act being signed.

While this information was coming in, I watched Washington Dulles airport go into lockdown. Nothing in – nothing out. This typically would indicate that POTUS was on the move. I also watched two aircraft exfil the area at the same time – not showing as AF1 – but something else. Which, btw – is not only very likely they would not broadcast his movement – but would also show as something entirely different. We witnessed GW Bush do the same thing when he went to Bagdad during the war, his AF1 747 was actually squawking as a Gulfstream aircraft.

So what is the Insurrection Act?

Before invoking the powers under the Act, 10 U.S.C. § 254 requires the President to first publish a proclamation ordering the insurgents to disperse. Remember this video shot in the rose garden and what POTUS said? Telling everyone to go home? Condemning what people were doing at the Capitol?

I am not going to lie, when I saw it I was a little angry at POTUS because I felt like he had just sold us out. HE was the guy who called everyone there, and now he was condemning us!? It made no sense. NOW IT DOES!

Now, the flight in question. MC4521 exfilled the Capitol right when all of this lockdown occurred. Interesting data point – it appears that the flight departed out of Oceana NAS. This is probably because if POTUS were to boogy out of DC, EVERYONE would see the movement and know something was happening. So, go to an alternate and secure exfil location.

Now, the flight in question. MC4521 exfilled the Capitol right when all of this lockdown occurred.

And then we have this flight (pic below) that went out ahead of it, MC46, which btw is moving out. The initial intel showed the aircraft as a C2 – which is a twin engine turbo prop… sorry, but there isn’t a turbo prop on the planet that can make it across the pond in 4 hours, let alone have the fuel capacity to do so.

And then we have this flight that went out ahead of it, MC46, which btw is moving out.

So, what is next? I imagine the next thing we will see is an announcement from POTUS once – likely via the EBS. Then, we will see the military going hot on arrests of the traitors.. my estimate is that the next 24-48 hours will be very telling. Watch for the 1.13.21 date.

And that was the end of the post. Thoughts? Drop your comments below.

This is just another copy of monkeywerx uninformative video.

I knew I had read this somewhere else…on Parler last night before they were temporarily shut down.

An ancient Chinese curse: “May you live in interesting times.” I am afraid that we do. Pray for OUR President, Pray for OUR Republic and OUR Constitution. It is a prayer for our National Survival.

I pray he did it

Wow that was stupid. I expect that as the Insurrect Act was signed into law in 1807, the author should know that T**** would not sign it again – Laws dont have freshness dates. Did they mean that the President* would invoke the Act?

“actually…..” Shut up Brian. I hate people like you. Try to contribute to society somehow without being a lil prick.

Trump wouldn’t be “signing” the Insurrection act. He would be “ACTIVATING IT!

Berta he would be “Invoking” not activating

There are no “Official Announcements” of the President invoking the Insurrection Act. But think of how it makes sense due to the intensity of the left’s insanity at the moment. Any information put out at this time would potentially give democrats what they need to further the push for impeachment. The air of mystery around “why are the dems impeaching with less than two weeks on the clock?” is a good thing for Trump. The appearance of being silenced by the Dems + Big Tech is really good for Trump’s case. What they’re doing is illegal. MSM + SM will… Read more »

I see Monkeywerx is silent today. I think it is sad that one would go to great lengths to spread non truths and get the Conservative Movement all worked up over nothing, not to mention look like idiots should they share this news on social media platforms. I hope I am 100% wrong but I feel very strongly that you are over selling this story, not to mention another day has passed an not a peep from you. Update nothing. I I am going to assume this is a hoax. Shame on you.

I think you may have hurt their feelings. Next time they are in Newark NJ, they probably won’t stop by to say hello.