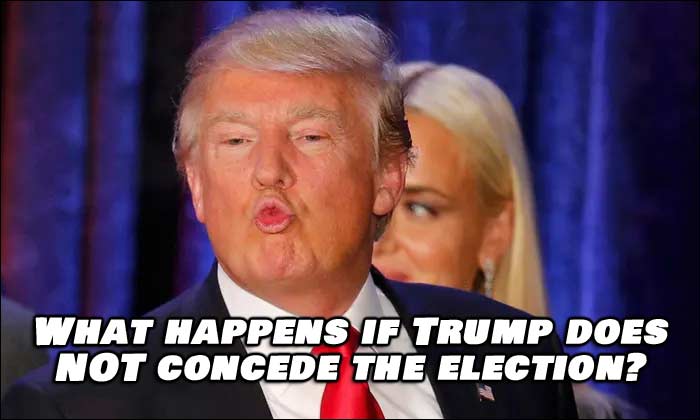 “It’s happened two times. In history. It happened in 1800. It’s happened in 1824. And, if you’ll remember, Hillary Clinton told Joe Biden not to concede. You remember that? Before this election, she told him, “Do not concede.” You know why she told him that? I hate to say it. Smart woman. She knows the law. But most Americans don’t. Most of you watching me, don’t know it. I didn’t know it, but now I do, but knowledge is power and I promise Donald Trump knows what I’m fixin’ to tell you. So do all of his lawyers.

So here’s what happens. Real, real simple. The most powerful thing that keeps the peace in the United States of America is not required by law. It’s just a custom and umm, it’s called a concession speech. We’ve been doin’ it a long time, but there’s no law that requires a concession speech. However, it does aid in the peaceful transfer of power. So normally, when a presidential candidate is in a fight for the presidency, a powerful position. It’s like a throne, like a king fighting for his throne. He has supporters and those supporters are literally ready to fight, if you will, for their guy. That’s just the way it works and it’s been that way since the dawn of time. At the moment of the concession speech, is when those people that support this guy are pretty much given the green light to simmer down, go home, it’s all over. It’s a surrender. It’s a white flag of surrender. But it is not required in the constitution, it’s simply a custom. It’s a wonderful custom.

Once a president concedes, the battle is over. There’s no more legal fighting, there’s nothing. Everything after that just sort of happens with a rubber stamp. Then the electors get together, they cast their votes in Washington, DC, the president is officially elected, and the votes are certified and that certification gives that man the presidency. But more importantly, his concession speech from the opponent is what gives him legitimacy and a transfer without drama.

But, two times in our history, presidents did not concede the election. Why? Well, not because they were trying to be rambunctious. But, just like Al Gore, they knew that something was off and they were not ready to give up a fight with a margin less than 1% in all the battleground states. According to the law, Georgia is gonna be recounted. We do not have any official result anywhere in the nation. Pennsylvania is gonna be recounted. Arizona is still being counted. Nevada is going to be recounted. We have a total recount coming. Now, after that recount, the president has legal options, to go to court to prove irregularities. So, let’s just say that none of that works and the president still will not concede the election.

Now immediately, that strikes fear in the heart of a conservative, because guess who controls the House? The democrats! But not so fast. The constitution goes on to say in that order, that each state in the Congress gets one vote, not each representative. Each state gets one vote for the president, Well, there are 50 states in the House. Of those 50, 37 are Republican. At that moment, a Republican congress will officially, constitutionally vote in the next president.

Why do you think Donald Trump has not conceded? He knows these things that I’m telling you. He understands that there was illegitimate votes cast. He understands that votes are still going on. Now, he may get tired of the fight. I don’t know. I don’t think he is though. But he does have a constitutional remedy to his dilemma. This is gonna be interesting to watch, but remember, Hillary Clinton told Joe Biden, “Do not concede, no matter what.” Why did she tell him that? Cause she knows what I’m tellin’ you. And so, Joe Biden has won a few battleground states with less than 1%. Those are automatic recounts. We will not have a winner, until we have a certification. If we can’t get a certification that’s not contested in the courts, it will go to the House of Representatives just before inauguration day.

Now, you might know about the panther is gettin’ real quiet in the background waitin’ for the attack. I’m not sayin’ that’s how it’s gonna go, but the constitution foresaw this. The constitution made a way for an illegitimate election to be overturned in the House of Representatives. So, class is dismissed. Now you know the truth.” ….. by Shane Vaughn

Great article I have studied and found that same conclusion, it’s a second hand we the people vote. In the end I really believe they just want their New World Order, so it’s about order out of chaos. We as a country me included have become complacent unfortunately. This ordeal is waking a lot of people up and I believe we will have appreciation for that fight and be better for it. Gratitude is in order.

Very interesting!!! Good because they stole this from Trump!!

What wisdom our forefathers had. Donald Trump is the best president in my 74 year life. “His truth is marching on.”

I agree with the legal analysis presented, but there are a couple of caveats. Regardless, however, if President Trump proceeds in this manner, the opposition party will do anything and everything to gum up the works, as it has absolutely no moral compass i.e. what happens if at least 2/3rd’s of the states don’t comply and thus no quorum? They will bribe and/or threaten anyone and everyone they can. Additionally, most American’s are ill informed. They are not watching Newsmax News, OAN or the Epoch Times. They are watching many of the fake news channels which continue to repeat the… Read more »

Trump is our modern day David. David had the lover of his wife murdered and god still made him king.
Please pray for America, please pray for Donald J Trump.

Trump, all the way to hell where he came from!

He will need to show our support to Congress….SEND YOUR LETTER SNAIL MAIL TO THE WHITE HOUSE EXPRESSING A FULL AUDIT OF THE 2020 PRESIDENTIAL ELECTION and your support for President Trump, include your address and email. DO IT TODAY!!

This is very interesting, I didn’t know all this but I hope he goes all the way. He belongs in the White House. He isn’t perfect but he is perfect for this job. God bless him