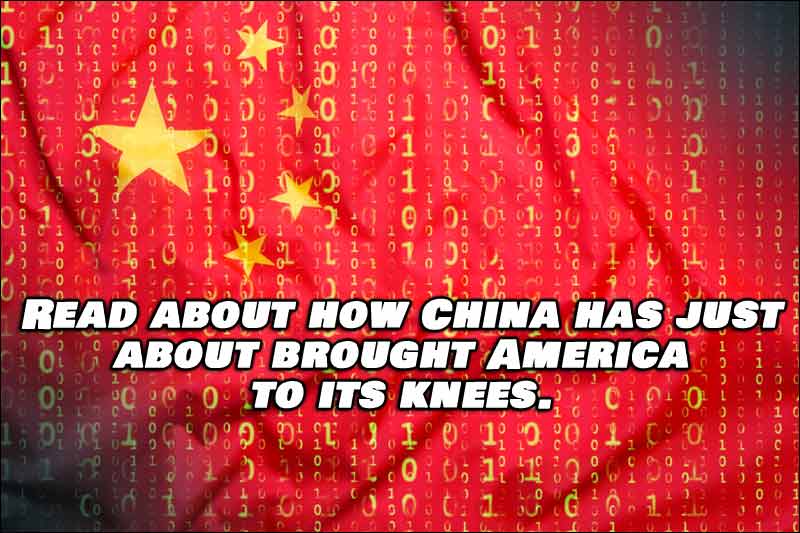 It’s not rocket science, China decided to fight the American people’s much needed and long overdue trade reform with a biological weapon. Not only did China release the COVID-19 virus just in time to completely change our election procedures and remove any legitimate verification of our voting process. But, components in our election machines are made in China and software backdoors, and “glitches” created by highly questionable entities have already been discovered that gave thousands of Trump votes to Biden; Quite the coincidence.

Chinese Virus – Wake up America – China is where way too many of our food products, medicines and supplements are being processed and manufactured.

Wake up America – Bringing manufacturing back home to the USA and protecting our own southern border is going to end up being not only a key to restoring our economy, but to maintaining our national security as well.

If we don’t wake up soon, we’ll all be singing “Bye Bye Miss American Pie” – Welcome to the United States of America owned and operated by Communist China with easy access from our Mexican border.

It’s Not Rocket Science – Since the FreeTraitors have had their way of it, our largest export has been American jobs and money.

Under the FreeTraitors way of thinking we might as well just outsource all of our military needs to Communist China, India, and Mexico just like we did everything else – What – Why not – I’m sure they could do it much cheaper – What – Why not – That wouldn’t be in the best interest of our country and the American people – Hum. . . . . . .

When a foreign government like Communist China owns, subsidizes and controls almost every industry it’s a real problem – Especially, when our own elected officials and US capitalists enable it to happen.

China has also been funding Antifa and the BLM through various backdoor channels.

The more that the globalist FreeTraitor propagandists fight our President and the American people’s clear desire for trade and immigration reform – The more blatantly transparent they become.

One thing that became obvious during and after the last presidential election, is that puppet politicians, the corrupt manipulative media and their globalist masters just consider the American people to be collateral damage in their game of globalization and cheap wages.

Every day more and more Americans are waking up – Wanting trade and immigration policies that will put the best interests of our own US CITIZENS first and foremost is not racist or fascist – It’s common sense, if you’re a US CITIZEN of any race, creed, or gender.

THE AMERICAN PEOPLE DO NOT TRUST THE MEDIA / GLOBALIST PROPAGANDISTS!

It’s not rocket science – The sudden economic downturn this year was obviously caused by the Corona Virus and anyone with half a brain isn’t buying that other nonsense – We were finally going in the right direction before China released COVID-19.

We finally had a president that was doing something about our traitorous trade and immigration policies – But the corrupt manipulative media, establishment puppet politicians and their masters have been fighting the American People tooth and nail every step of the way.

That pretty much sums things up. What are YOUR thoughts? Please let us know in the comments below.

Sounds about right. The election was stolen by the CCP and traitorous politicians.

When you wear your mask… Know you stand with China… Take the mask off. This is our country