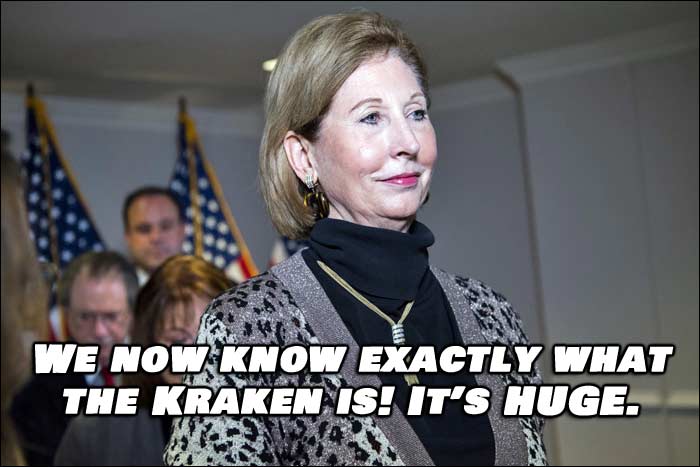 It’s been several days since attorney Sidney Powell used the term ‘the Kraken‘ when she said that she was going to ‘Release The Kraken‘. Of course many of us figured she was referring to the movie Clash of The Titans, which was when this horrible, gargantuan sea monster (named The Kraken) is called up from the depths of the sea. Turns out it may have partly been a reference to the movie, trying to explain the power behind the information to be released, but it turns out now that we find it she was referring to a ‘program‘. A DOD (Department of Defense) Cyber Warfare Program that was designed specifically to track systems that commit criminal activities by the ‘deep state.’

The Marshall Report stated this :

Holy Radar – that’s the Kraken!!! Who knew it is a Department of Defense Cyber Warfare Program? It Tracks Systems and acquires evidence of nefarious activities and crimes committed by The Deep State!

When Sidney Powell stated she HAS RELEASED THE KRAKEN, most of us thought of Clash of the Titans and cheered her on for her gutsy remark.

She never blinked and held a stern, a serious face when she said it.

She wasn’t joking and now we know why!

The “Kraken” is a Department of Defense-run cyber warfare program that tracks and hacks various other systems to acquire evidence of nefarious actions by the deep state!

President Trump and the loyal patriots in the Military and Space Command now have all the evidence of voter fraud and election-related treason.

This will be used against the enemies of America!

Sidney Powell herself confirmed that the Kraken was definitely the DoD’s cyber-security program. In the tweet (see below) she even tagged President Trump along with several others.

Dear @GaSecofState
Please consider this an open records act request for the #Zoom meeting of today’s date with electors & your refusal to perform a real audit to include envelopes & all documents required. #TrumpLandslide@realDonaldTrump @GenFlynn@abigailcfrye @LLinWood #GA

It is time for GA Governor @BrianKempGA to order a full audit of votes allegedly cast in 11/3 election & special session of state legislature.

Have an opinion? .. Drop your comments below.

Fort the sake of his country I pray this is true. We definitely need Trump now