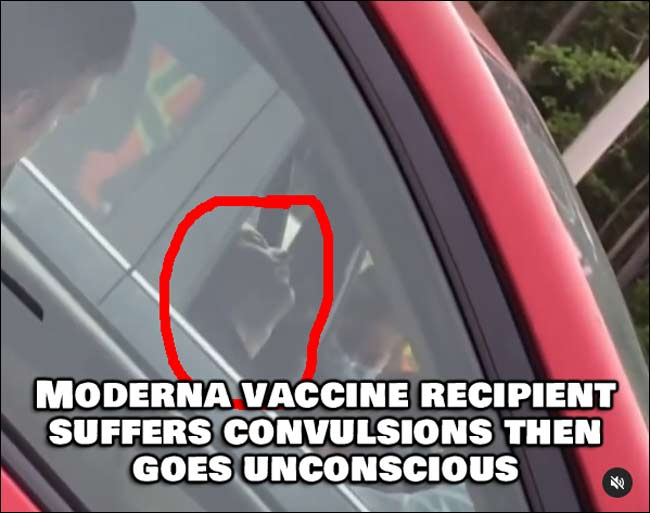 You’ll find the video below, but I’ll just give a short description first of what I watched in the video. In the actual video, you can see starting at 9 seconds, the person sitting in one of the front seats (2 cars away from person recording) has gone unconscious, their head is flopped back with no response or movement at all. The people who have responded by helping, proceed to put the the back of the seat back so the ‘patient’ would be laying back instead of sitting up. You can also see the guy in the middle car watching in amazement. They examine and watch the ‘patient’ for at least 10 seconds, then the camera breaks  away and comes back. It appears as if the ‘patient’ is now groggy and somewhat ‘conscious’ as the ‘responders’ massage his/her shoulders / chest. The ‘patient’ seems to ‘pass back out’ as they continue to ‘massage’ them. By the end of the video, the ‘patient’ seems more awake, yet still groggy and rubbing his/her face and head as ‘he’ speaks with what appears to be medical personnel. After all that, it’s about 48 seconds into the video, then the person sitting in the car directly in between the person having the reaction, and the person recording, has HIS OWN EPISODE where HE passes out also!!… Continue below to watch the actual video, and to read what the person wrote who actually filmed the video.

Less than 5 minutes from getting God knows what injected inside them the two people to my left starting having seizures. First the gentlemen in the red car was watching in shock as the driver next to him was having a seizure. Little did he know he would have one right after him. I called the medics to help him. They have a procedure where after you get the shot you have to wait in the car for 15 minutes and if something goes wrong to honk your horn and someone will show up. Well these folks to my left just passed out into seizures with no warning. If someone didn’t notice (in this case it was me) these folks would just continue having seizures. This policy must change. I told the (women) in charge she ignored me I told another man he pointed me back to the women in power like he can’t do nothing. Smh.

Folks this happened within 5 minutes of them getting the first round of Moderna!

This is something else folks. Don’t shoot your self up with this over something that has 99.8% recovery rate. Look what happened to these guys! In front of my eyes y’all. I WITNESSED IT ALL HAPPEN! (God planted me there this morning) for me to see this to show y’all!

This was just one minute of a 10 minute situation. I only filmed the end after the medics came!

The beginning was much more chaotic. It was like a wave of seizures jumping from car to car and mine was next!

I’ve never seen anything like this! I was like I hope they don’t turn into zombies cuz a buddy of mine forced by his (mother) to get the shot was in the back seat and he just got shot up with this stuff. I drove him there and back. Didn’t get the shot nor would ever get it.

I was like bro look at me in my eyes sit where I can keep my eyes on you. Lol seriously tho.

The whole time I was like this is it. The zombie apocalypse. Those Qanon folks was right all along lol 🐸

Folks don’t do this to yourself. Just don’t do it!

As always, The Messenger, Zetaman

THOUGHTS?? Feel free to drop your comments below.