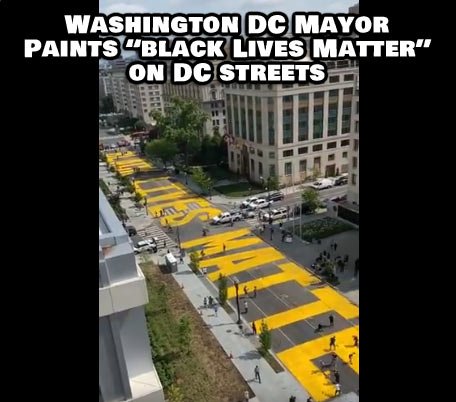 The mayor of the District of Columbia, Muriel Bowser, had “Black Lives Matter” painted on the street leading directly up to the White House. Watch the video below.

Mayor Muriel Bowser, of the District of Columbia, went ahead and had “Black Lives Matter” painted on the street leading directly up to the White House (see Video Below). This street has been a hot spot for protesting in the Nation Wide George Floyd Protests. This morning (June 5th) people were seen spray painting enormous yellow letters across 16th street. On the Official Black Lives Matter DC twitter account they suggested the move was a “distraction from real policy change”.
This move follows a mere couple of days after Trump had the U.S. Park Police and National Guard troops displace protesters with tear gas who were protesting outside the White House on Monday afternoon. Following the protesters displacement, Trump was spotted walking out of the White House to St. John’s Episcopal Church to take a picture of himself holding The Bible.

Bowser called out Trump for the events, tweeting, “I imposed a curfew at 7 pm. A full 25 minutes before the curfew & w/o provocation, federal police used munitions on peaceful protesters in front of the White House, an act that will make the job of @DCPoliceDept officers more difficult. Shameful! DC residents — Go home. Be safe.”

While the painting was taking place Bowser showed off a letter she sent to Trump from Thursday showing she requested that he withdraw “all extraordinary federal law enforcement and military presence from Washington, D.C.” since the state of emergency was no longer undergoing and protests were now occurring without incident. Do you support the Mayor of DC and her actions regarding the protests? Let us know below.