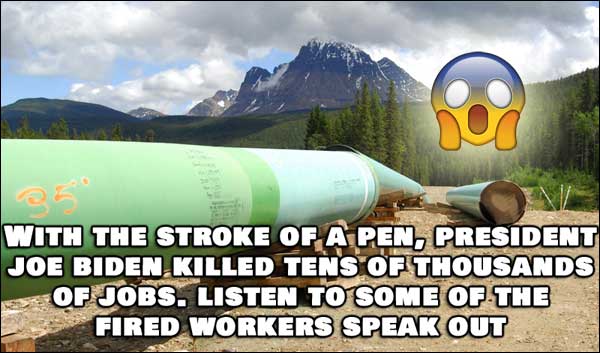 On January 20th, 2021, with the stroke of a pen, ‘President’ Joe Biden killed tens of thousand of jobs (and burned billions of dollars that were already spent on it) and ruined the livelihoods of the same amount of families. One of the MANY executive orders the ‘President’ signed was the “Executive Order on Protecting Public Health and the Environment and Restoring Science to Tackle the Climate Crisis” (Source). This opened the door for “Revoking the March 2019 Permit for the Keystone XL Pipeline” which was done immediately, thus putting a stop the the construction and then use of the Keystone XL pipeline. Canada immediately freaked out (it was the method in which oil would be brought into Canada). Tens of thousands of workers and their families freaked out. Realize thought that the oil still needs to get to where it needs to go, so instead of a safer pipeline, it will now have to be TRUCKED, RAILED and SHIPPED. All methods that have been proven to be more hazardous than the pipeline itself. All those other methods involve huge amounts of exhaust, and fuel burning; along with the risk of accidents and spills. But we’re here to focus on the jobs lost and the people behind the jobs. (3 Videos Below)

In the first video below, we have an un-named black man who is visibly (and understandably) very upset. He’s recording his video while sitting in the work truck that he just recently purchased. In the video (seen below), part of what the man states “It just doesn’t f*ckin make any sense. It doesn’t make any sense. HOW! Did Donald Trump… I know how – They took it! They didn’t steal the election. When you steal something that’s when no one knows that you took it. But they outright boldly went in and said, “We’re gonna f*cking take this presidency from you. Screw the American people. Screw you, Donald Trump. Screw everybody! America last! Oh, and by the way, you guys are going to lose your job!” ”

2nd Video – Guy Williams – Guy Williams, who has worked in the pipeline industry for 53 years, reacts to the president’s executive order on ‘Fox & Friends’

Did any of you people back Joe Biden? Stop whining.

He was wear a Trump mask so I doubt he voted for Biden.

Your Union Backed him you all must have voted for him…

These poor people. I feel so sorry for them.

This is total BS. Unity my a@&. This has nothing to do with Climate change. Climate change is another hoax created by the Dems. We have to stand up and take this country back.