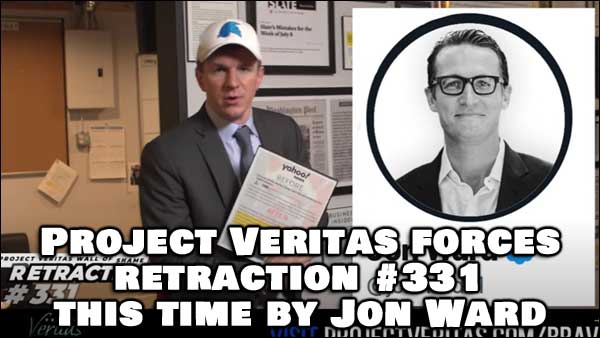 James O’Keefe and Project Veritas just released Retraction #331 (video below), or what they also call RETRACTO 331, and it’s the 331st time they have forced a ‘journalist’ or ‘reporter’ to have to print a retraction. Usually the retraction is in response to a previous article they wrote that Project Veritas took them to court over, and won, which in turn forced the printed retraction. As far as I know, Project Veritas has NEVER lost a court case, and this time was no different. Yahoo News ‘Reporter’ Jon Ward (Senior Political Correspondent) was forced to print a “big fat juicy correction”, or also known as a retraction, when he previously incorrectly reported that “O’Keefe and his group, Project Veritas, alleged that the videos showed illegal ballot collecting, referring to it as “ballot harvesting.” But the practice of taking mail ballots to the post office or election office for others was legal for a roughly two-week period in Minnesota this summer due to court rulings.” The statement obviously was meant to undermine and minimize the fraud exposed by Project Veritas’ claims, as if ‘ballot harvesting’ is just an ‘idea’, not a real thing.

But it is real, and the statement that got Jon Ward into trouble was the part about the process of ‘ballot harvesting’ being legal in the state due to a court ruling. That statement was a LIE; It was FALSE. Project Veritas swoops in and then here comes the ‘tail between the legs’ retraction. Jon Ward issued this statement (it’s all in the video below) “O’Keefe and his group, Project Veritas, alleged that the videos showed illegal ballot collection, referring to it as “ballot harvesting.” Ballot collection is legal in Minnesota, with a limit of three ballots per person doing the collection, but for a roughly two-week period leading up to the August 11 primary, that limit was NOT ENFORCED. Project Veritas claims its video evidence shows that a Minneapolis activist collected more than three ballots outside that window.” The video that showed a ‘collector’ in Minnesota with a LOT more than 3 ballots in his car was the ‘Liban Mohamed’ video released by O’Keefe (it’s in the video below too).

Thoughts? Please feel free to drop your comments below.

Chopping away at the tree of fraud, lies, and tyranny is a good thing. No, a great thing. A fantastic thing. A much-needed thing if we are to survive as a republic. Thanks much for all you are doing!!

Totally awesome and so happy that others are more interested in exposing the crimes of the left rather than winning fame, fortune or friendship with the enemies of America.

Love it!! Great work as always!!