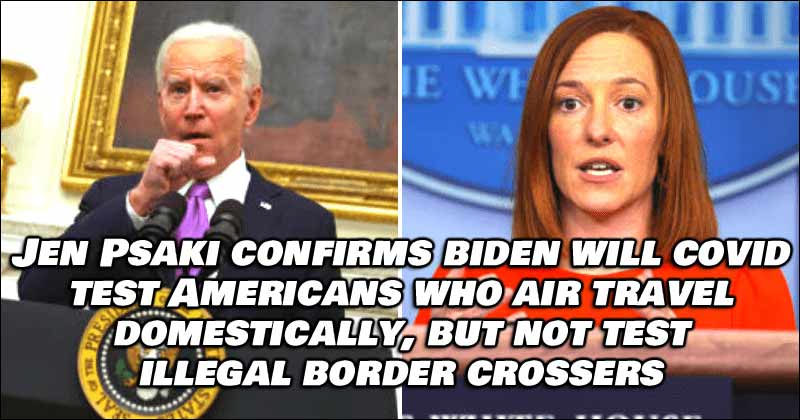 Just recently at one of Jen Psaki’s (Biden’s Press Secretary) daily briefings, she was asked by a reporter if the Biden administration feels it’s more important to test American Citizens for the China Virus before they use the airlines for domestic travel, rather than testing the illegal immigrants that are presently illegally crossing our borders. Note that Biden has stopped the construction of the ‘wall’ and it’s been widely reported that our borders in multiple places, are wide open. First mistake that Psaki makes is she denies the borders are open. She states “Well the border is NOT open …” LIE! .. Psaki just LIED ( https://www.thegatewaypundit.com/2021/02/illegal-crossings-southern-border-double-january-previous-year-thanks-joe-bidens-open-border-policies-pandemic/ and https://news.yahoo.com/biden-rescinds-national-emergency-u-163953971.html ) .. The reporter corrects her, and says that there are reports from multiple authorities at the border which have confirmed people are still illegally pouring in, and that Americans are concerned that these illegal border crossers are NOT being tested for Coronavirus.

Psaki then stumbles and in short, blames the reporter for not hearing her statements that she’s already made earlier, she says “Let me re-itterate what I’ve done in here. I know that different people and in here on different days so I am certain happy to do it aahhhh, uuumm, again. Uh, first, the majority of people that come to the border are turned away.” … LIE! Another blatant lie! Read the source links above. She continues “And we are enforcing our laws.” … Really? Can you provide me with a list of illegal immigrants who have been arrested at the border? A statement from Gateway Pundit proves that Biden has reinstated Obama’s ‘catch and release’ programs, “Since his inauguration, Joe Biden has ended border wall construction destroying thousands of jobs. Biden opened the borders to illegal aliens and reinstated Barack Obama’s catch and release policies.” .. Jen Psaki LIES THROUGH HER TEETH, and all you need to do is listen for a minute, take note of what she says, and then go fact check it. … if she wanted to be HONEST, her reply would have been “President Biden’s answer is NO. Requiring these undocumented border-crossers to undergo Covid testing would be unfair, intimidating and XENOPHOBIC!” … But testing American Citizens who want to domestic travel is perfectly fine. … How does that make sense?? .. Please drop your comments below.