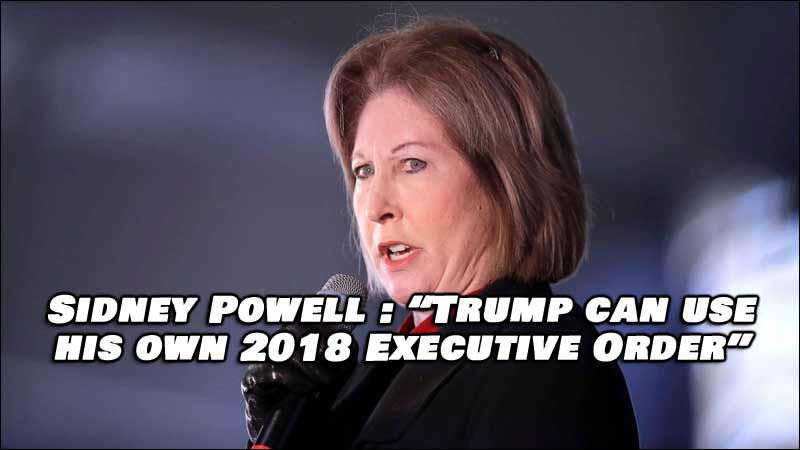 It appears as if time is running short, and Trump’s options are dwindling. Up to bat steps Sidney Powell who today stated that because there was provable foreign interference in our 2020 Presidential Elections, President Trump can act on an Executive Order that he signed back in 2018. One which states he only has until 45 days after the election to take such action.

The text of the order is quite longer (link below to full text), but in part reads “not later than 45 days after the conclusion of a United States election, the Director of National Intelligence, in consultation with the heads of any other appropriate executive departments and agencies (agencies), shall conduct an assessment of any information indicating that a foreign government, or any person acting as an agent of or on behalf of a foreign government, has acted with the intent or purpose of interfering in that election.”

When asked about how this can help President Trump, Sidney Powell told The Epoch Times that with this executive order as a ‘sword’, President Trump can wield “all kinds of power. Power to do everything from seize assets, to freeze things, demand the impoundment of the machines. Under the emergency powers, he could even appoint a special prosecutor to look into this, which is exactly what needs to happen. Every machine, every voting machine in the country should be impounded right now. There’s frankly more than enough criminal probable cause to justify that, for anybody who’s willing to address the law and the facts purely on the basis of truth and not politics, or corporate greed, or global wealth.”

Here’s the Link to 2018 Executive Order, titled ‘Executive Order on Imposing Certain Sanctions in the Event of Foreign Interference in a United States Election’ :
https://www.whitehouse.gov/presidential-actions/executive-order-imposing-certain-sanctions-event-foreign-interference-united-states-election/

What do you think, should President Trump use this Executive Order? Please let us know in the comments below.

Yes it should have been done already!! Unless he has!!

Yes!! This vote cheating needs to be fixed before another election. We can’t let these democrats ruin our country!!

Open up a big box of handcuffs, let’s get these these cheaters behind bars.
China wants our land, they can’t have it!

Yes yes yes do it

Yes, America is more important than the corrupt politicians!

The minute after the USSC stated they weren’t interested, I wish he would’ve done it. I hope he did some prior planning.

Whatever can be done, should be done. The swamp people are fighting the rule of law and trying to stage a coup d’tat that has to be defeated. Time to stop playing games with these people.

The corruption is so widespread and deep, of course he should do it. Otherwise it’ll all disappear, the wrongdoings done by the Biden family and all the other corrupt politicians. Mainly the Democrats.

Absolutely he should do it NOW!!

He should do it sooner than later. Would be poetic justice if they could prove, beyond a reasonable doubt, that the Biden family has ties and been influenced by China. Would be great to see his finances and property seized. Hopefully he can snag big tech too

Yes, he should immediately!

I believe that during a national emergency that a sitting President is not required to transfer power after an election.

Yes i think that President Trump should use the 2018 Executive Order i sure do should have already been done.

YES! We need to save our Nation and the integrity of our vote! Do it NOW Mr. President!!!

Yes! Impound machines enforce American law make them jump through court hoops to change the situation, Not the President that has done no wrong!!

Put your foot down President Trump!! Many many millions are behind you!! Stop this craziness and stop this Big Tech censoring BS!! It’s causing division of an entire country that is NOT RACIST BY THE WAY!! So sick of that excuse! America when they speak of racist they’re talking about YOU!! Americans help each other all the time through difficulties, disasters, THIS WAS ALL A HUGE PLAN TO TAKE OUR FREEDOM AND EVERYTHING AMERICA WAS FOUNDED ON! MOVE YOUR ASS TO CHINA IF AMERICA IS SO HATEFUL AND RACIST!!

I believe he should, and sooner than later, time is short!!

Use the EO before it’s to late please

If our country is to continue as the United States something has to be done soon.Please President Trump, save our country.

should have been done before now. Look at all the time they’ve had to destroy the evidence or change something in those machines!

Yes, it is there for this very reason!!!

I hope he enacts that power.

Absolutely. There is more than enoug cause for him to take action.