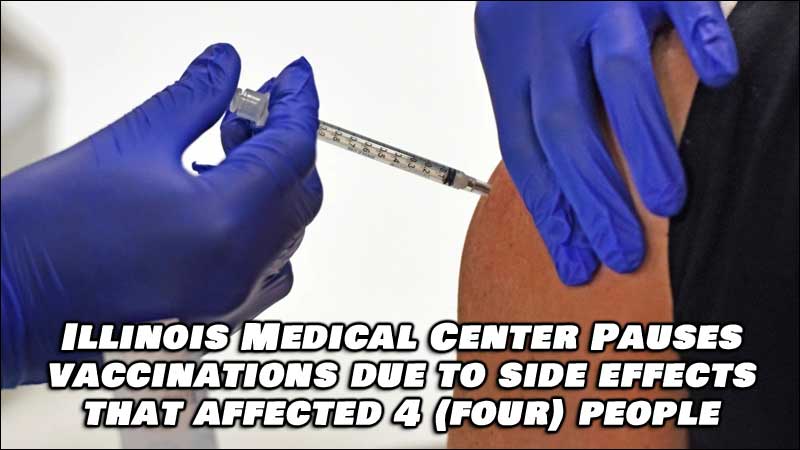 Advocate Condell Medical Center in Libertyville, Illinois (39 miles north of Chicago) has temporarily halted vaccinating its employees after four are undergoing less than desirable symptoms such as tingling throughout the body and elevated heart rate. Three are at home recovering while the fourth is still undergoing treatment. It is worth noting that while this branch has halted passing out the vaccine like candy, the hospital’s 11 other branches are still injecting away.

The medical center is attempting to downplay it saying this has only happened to four people when they have dosed over three thousand. They are stating the pause is necessary simply to find out why this is occurring.

This comes immediately following a report that an Alaskan hospital had two employees suffer an allergic reaction to doses taken as well. One worker, a middle-aged woman with no previous allergy history, has been stabilized after treatment Tuesday. She was experiencing a rapid heartbeat, trouble breathing, a skin rash, and redness. She was admitted to a Juneau hospital for monitoring. The second employee experienced slightly more mild yet still undesirable symptoms such as eye puffiness, lightheaded, and a scratchy throat.

I knew well before the vaccine came out that I wouldn’t be taking it and this completely reaffirms my beliefs. Let us know in the comments below if you will be taking it.

Nope not getting it

You can pay me. To throw it in the trash

Nope. If you haven’t watched it already, search Plandemic NoDoctorNation. FB she others are censoring the link

No I will not be taking the vaccine