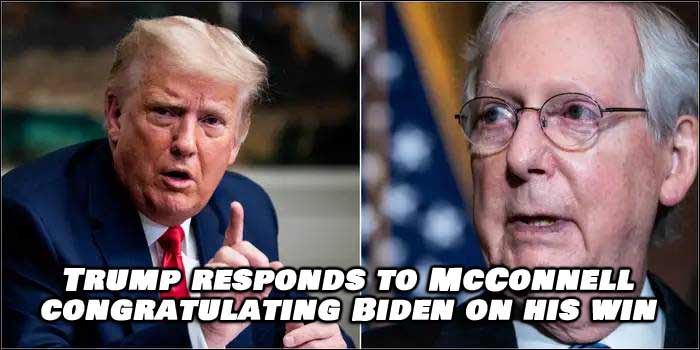 The wait is finally up. It took over 14 hours but President Trump has finally responded to Mitch McConnell congratulating Joe Biden on his “win”. Now Mitch may say it’s over but here at The Unapologetic Republican, we stand with our President.

“Mitch, 75,000,000 VOTES, a record for a sitting President (by a lot). Too soon to give up. Republican Party must finally learn to fight. People are angry!” Trump wrote on Twitter early Wednesday morning, re-tweeting an article from the Daily Mail that was headlined “MAGA turns on Mitch.”

Mitch has been receiving a ton heat from Republicans and it is well merited.

In a quick attempt to save face McConnell threw in “I look forward to finishing out the next 36 days strong with President Trump. Our nation needs us to add another bipartisan chapter to this record of achievement.”

Do you think Mitch is a RINO? We sure do. Let us know in the comments below.

I think Mitch McConnell is worthless and he and others who ride both sides of the fence and stand for nothing need to go home and stop wasting our money.

Yes, McConnell is a RINO.
He needs to go.

Mitch is a gutless asshat that needs to go

He is a RINO, trying to assure he still has a job. Should retire and let a true patriot in his position.

As a Kentuckian, I have been ashamed of Mitch McConnell’s conduct on NUMEROUS issues and this one just tops them all. He tries to “play the long game” politically but this, Senator McConnell, is no damned game.

Moscow Mitch Is a No Good POS He deserves a stay in GITMO & a daily dose of waterboarding.