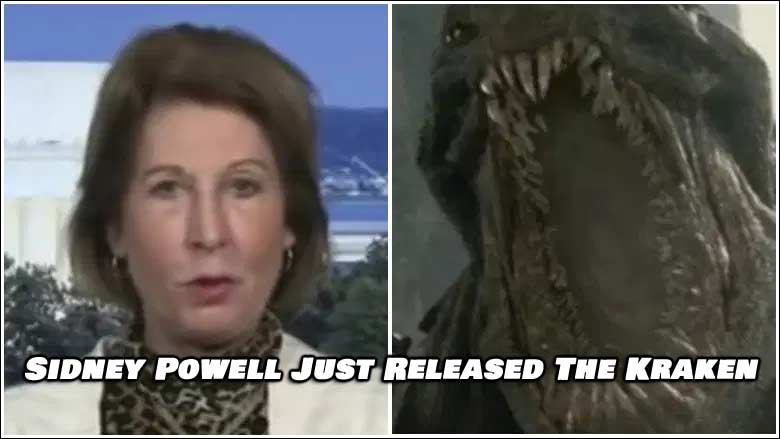 She spoke for over 10 minutes, and we transcribed the main guts of it below. It’s word for word what she said, so forgive the ‘choppy’ English in some parts. All I know is that voter fraud is real, it’s been real for a long time and after listening (reading) this, it will blow your mind and you’ll see this past Presidential Election in a whole new light. …

In addition to the text below, under it you will find the actual video so you can listen for yourself. :

” … Through Venezuela, Cuba and likely China, and the interference with our elections here in the United States, the Dominican voting systems, the Smartmatic technology software and the software that goes in other computerized voting systems here as well, not just a million were created in billions in Venezuela at the direction of Hugo Chavez to make sure he never lost an election after one constitutional referendum came out the way he did not want it to come out. We have one very strong witness who has explained how it all works. His affidavit is attached to the pleadings of Lin Wood and the lawsuit he filed in Georgia. It is a stunning, detailed affidavit because he was with Hugo Chavez while the he was being briefed on how it worked. He was with Hugo Chavez when he saw it operate to make sure the election came out his way. That was the express purpose for creating the software. He has seen it operate. And as soon as he saw the multiple states shut down the voting at the on the night of the election, he knew the same thing was happening here, that that was what had gone on about the software itself was created with so many variables and so many back doors that can be hooked up to the Internet or a thumb drive stuck in it or whatever.

But one of its most characteristic features is its ability to flip votes. It can set and run an algorithm that probably ran all over the country to take a certain percentage of votes from President Trump and flip them to President Biden, which we might never have uncovered. Had the votes for President Trump not been so overwhelming in so many of these states that it broke the algorithm that had been plugged into the system and that’s what caused them to have to shut down in the states. They shut down and that’s when they came in the back door with all the mail in mail, in ballots, many of which they had actually fabricated. Some were on pristine paper with identically matching perfect circle dots for Mr. Biden. Others were shoved in in batches they’re always put in and a certain number of batches and people would rerun the same batch. This corresponds to our statistical evidence that shows incredible spikes in the vote counts at particular times.

And that corresponds to eyewitness testimony of numerous people who have come forward and said they saw the ballots come in the back door at that time, notably the Dominion executives who are nowhere to be found.

Now they are moving their offices overnight to different places. Their office in Toronto was shared with one of the Soros entities. One of the leaders of the Dominion Project in overall is Lord Malloch Brown. Mr. Soros, the number two person in the U.K. and part of his organization. There are ties of the Dominion leadership to the Clinton Foundation and to other known politicians in this country. Just to give you a brief description of how this worked, I’m going to quote from a letter that was written, and I will read that to make sure I get the quotes right. This person was objecting to the United States acquisition of Sequoia Voting Systems by Smartmatic, a foreign owned company. I believe this transaction raises exactly the sort of foreign ownership issues that syphilis is best positioned to examine for national security purposes. It’s undisputed that Smartmatic is foreign owned and it is acquired Sequoia. They keep changing the names as they go along different times. When a problem comes up, they just create another corporation and call it a different name. But it was a voting machine company doing business in the United States. Savoy Sequoia voting machines were used to record over one hundred and twenty five million votes during the 2004 presidential election in the United States.

Smartmatic now acknowledges that Antonio Mujica, a Venezuelan businessman, has controlling interest in Smartmatic. But the company has not revealed to all the Smartmatic owners are. According to the press, Smartmatic owners are hidden through a web of offshore private entities, and that is, in fact, true. Smartmatic has been associated with the Venezuelan government led by Hugo Chavez, which is openly hostile to the United States. And, of course, as we all know, communistic and really brutalizing its own people. The system has been continued. There, Mr. Maduro and ensured his election Smartmatic, possible connection to the Venezuelan government poses a potential national security concern in the context of its acquisition of Sequoia because electronic voting machines are susceptible to tampering and insiders are in the best position to engage in such tampering. This letter expresses concern of the Chicago 20th, 2006 primary election, and it ends by saying the products and services that are Venezuelan origin and evaluate Smartmatic ownership to determine who could have influence and control over these and other Sequoia products and services are important to the national security of the United States.

This letter was written to Hank Paulson on October six, 2006 by Congresswoman Carolyn B Maloney. Senators Klobuchar and Warren have raised these concerns as recently as December twenty nineteen. Why? Our government has not taken them seriously. That’s beyond my comprehension. Unless they have some of the three letter agencies have used them themselves in other parts of the world. We know that the technology was exported to affect an election in Argentina. That’s admitted by our friend who wrote the affidavit about Hugo Chavez and his interest in Smartmatic again in 2006, Carolyn Maloney wrote The Honorable John Know, the secretary of the Treasury about the issues. Speaking of smart matics leadership, one of the Smartmatic, a patent holders, Eric Coomer, I believe his name is, is on the Web as being recorded in a conversation with Antifa members saying that he had the election rigged for Mr Biden. Nothing to worry about here. And he was going to say, we’re going to f trump his social media is filled with hatred for the president and for the United States of America as a whole, as are the social media accounts of many other Smartmatic people. There has been widespread use of this dominion itself, utilized in two thousand jurisdictions. In 30 states, it has been on certifiable and multiple states who realized all the problems that it had, including Texas.

Experts have described it across the board from a Princeton group of three professors to experts that we have talked to about its end user vulnerabilities. People can admittedly go in and change whatever they want. They can set the ratio of votes from one thing to another. They can say that a Biden vote counts as one point twenty five and a Trump vote count six point seventy five. And those may be the numbers that were actually used here. It’s not just the swing states that were affected. The algorithm was likely run across the country to affect the entire election. Like I said, we only discovered it this year because of the overwhelming number of votes for President Trump in the swing states that caused the machines to have to shut down for them to backfill or adding votes. We have evidence of different numbers of votes being injected into the system, the same identical, unique six digit number multiple times, and at least two states that we’ve analyzed so far. And I’m talking about like three hundred and forty one thousand five hundred and forty two votes for Biden and one hundred thousand twelve for Trump.

There’s no explanation, no logical explanation for the same numbers being injected twenty minutes apart into the machine, the software manual itself.

You can download it from the Internet and I would encourage you all to read it because it specifically advertises some of these things as features of this system. Why it was ever allowed into this country is beyond my comprehension and why nobody has dealt with it. It’s absolutely appalling. The machines were easily accessible to hackers. There’s video on the net that will explain to you how a kid with a cell phone can hack one of these voting machines. There’s been no oversight of Dominion or its software. Workers in each county were trained by Dominion, but there’s no evidence of any monitoring. Otherwise, we have testimony of different workers admitting that they were trained how to dispose of Trump votes and add to Biden votes. The software has a feature pursuant to which you can drag and drop any number of batches of votes to the candidate of your choice or simply throw them away. So we have mathematical evidence in a number of states of massive quantities of Trump votes being trashed. Just simply put in. A trash like you put on your computer with any file and Biden votes being injected. That’s addition to the ….. “

Do you have an opinion about this? Please comment below.

…and thus it begins..

This is absolutely disgusting! How in the world Dominion was not vetted prior to being hired?
Who’s in charge of procurement of these voting machines? How was the purchase authorized?