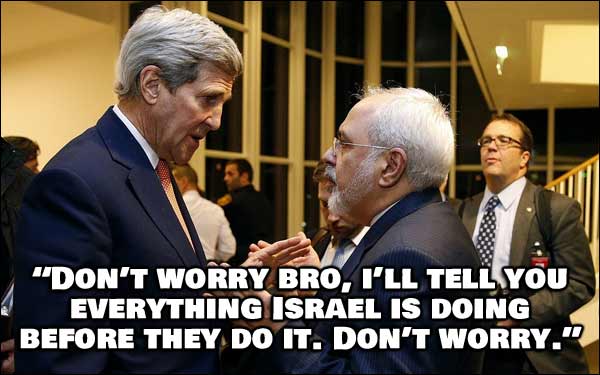 Even though the traitor has come out to deny it, there’s an audio tape with John Kerry on it where he ‘tips off’ Iran about top secret Israeli military strikes. “This never happened” John Kerry has come out to say, but there’s just one problem with that statement Mr Kerry, IT’S ON TAPE. There exists leaked audio which proves John Kerry is a LIAR and a TRAITOR. But Kerry is sticking to his guns, tweeting out “I can tell you that this story and these allegations are unequivocally false. This never happened—either when I was Secretary of State or since.”. Strange though because on the leaked audio recording, John Kerry is speaking with Iranian Foreign Minister Mohammad Javad Zarif and does exactly what he just said he did not do. He tipped off Iran about confidential Israeli military plans.

In further attempts to distance himself from the situation, John Kerry also tweeted an old post by the Washington Post in 2018 which cited a State Department spokesperson saying that the Israeli attacks had already been disclosed by Israel itself. The Washington Post also shared a story from September 2018 from Reuters (all source links found below) that had an Israeli official who stated that the U.S. ally (Israel) had carried out 200 attacks against Iranian targets in Syria. So part of Kerry’s response and defense is that Israel was the one that disclosed the information, which Israel denies. In fact Israel pointed out that Iran knew many specifics that were never mentioned by the Israeli news or any other source for information. Insinuating that it MUST have been John Kerry, and only John Kerry that gave them that information. What further backs that up is the existence of this leaked audio recording, which still has not been released to the public in its entirety.

Heavy hitters among the GOP are calling for the resignation of John Kerry. Senator Rick Scott did not hold back at all, “The allegations involving John Kerry are deeply disturbing and must be explained immediately. Until we have clarity and know the truth, President Biden must remove John Kerry from all access to and briefings on national security intelligence. If these allegations are true, he must resign.” … Senator Dan Sullivan (Alaska) also chimed in and said “If this is true, it’s traitorous and Kerry needs to go.” … Rep. Elise Stefanik out of New York tweeted out “This is a criminal act and John Kerry must be immediately investigated and PROSECUTED. President Biden must immediately remove John Kerry from any government or advisory position.”

In the leaked audio recording, which we hope to have shortly, Iran’s top-most diplomat Mohammad Javad Zarif talks about many issues, including some that are taking place within Iran. He complains that the elite Revolutionary Guards had more influence in foreign affairs and the country’s nuclear dossier than him. He’s heard saying “I have never been able to tell a military commander to do something in order to aid diplomacy.”. The foreign ministry spokesman did NOT dispute the authenticity of the recording when he spoke yesterday. All he said was that the news channel that released the audio, only released bits of it and it was part of a 7 hour interview. …. Thoughts? What do you think should happen to John Kerry if the leaked audio proves he did tell top secret Israeli info to Iran? .. Please drop your comments below.