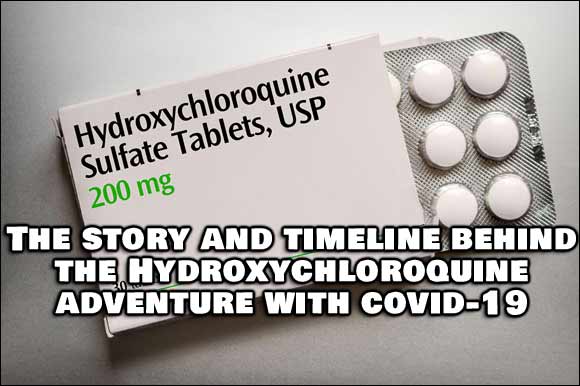 Our story begins like many others of ours, where no matter what President Donald Trump said, the Left always found fault with it somehow. I mean, it was so bad that President Trump could have cured cancer, and the Left would have complained that he put oncologists out of work. But seriously, this time the narrative was with the drug Hydroxychloroquine. By this point, you should be all caught up with a general timeline of the drug, and it’s association with President Trump, Dr Fauci, and the Left (including doctors). COVID-19 was ‘running wild’ back in April of 2020 and President Trump asked during a briefing “What do you have to lose?” after reports came in the the malaria drug has had success internationally when fighting COVID-19. He continued, referring to patients who were down to their last hopes, “Take it. I really think they should take it. But it’s their choice. And it’s their doctor’s choice or the doctors in the hospital. But hydroxychloroquine. Try it, if you’d like.” … (All Sources Listed At Bottom of Article)

On May 18th of 2020, President Trump admitted to taking the drug, he stated “I’m taking it – hydroxychloroquine” as he was sitting in the White House’s State Dining Room with reporters. He continued “I think it’s good. I’ve heard a lot of good stories. And, if it’s not good, I’ll tell you right, I’m not going to get hurt by it.” When asked if the White House’s doctor approves, the President responded “After numerous discussions he and I had about regarding the evidence for and against the use of hydroxychloroquine, we concluded the potential benefit from treatment outweighed the relative risks.“

June 16th, 2020, the attack on Hydroxychloroquine continues. This time it’s the FDA themselves. The FDA completely revokes the use of Hydroxychloroquine within the United States. All doctors stop prescribing it. (Many Left Doctors already would not prescribe it due to the same reason that Pelosi hates it; President Trump) .. See the FDA Source link below for their full reasoning on revoking the drug’s use a month after the President stated he’s taking it.

July 31st, 2020, The infamous Dr. ‘Flip-Flop’ Fauci goes national and states that HCQ (Hydroxychloroquine) is NOT effective in treating coronavirus. Remember this is the guy that President Trump assigned as the head of the Coronavirus Task Force back in the end of January. This is the same guy the held his head in his hand (shaming Trump) as Trump talk about Hydroxychloroquine on national television.

Now here comes 2 of the biggest Flip-Flops of them all. NOW, all of a sudden we’re a couple weeks into the Biden Presidency and Hydroxychloroquine is magically OK, and doctors can begin to prescribe it! WOW, what happened all of a sudden? … On January 1st, The American Journal of Medicine published this “Hydroxychloroquine (HCQ) is an antimalarial/anti-inflammatory drug that impairs endosomal transfer of virions within human cells. HCQ is also a zinc ionophore that conveys zinc intracellularly to block the SARS-CoV-2 RNA-dependent RNA polymerase, which is the core enzyme of the virus replication. HCQ was approved by the US Food and Drug Administration in 1955, has been used by hundreds of millions of people worldwide since then, is sold over the counter in many countries, and has a well-characterized safety profile that should not raise undue alarm.“

Thoughts on the timing of all this? Can you see the obvious timeline? Please feel free to drop your comments below.

Well isn’t this interesting. After how many AMERICANS could have been saved. They essentially murdered people because they didn’t want to agree with our President. Now it’s magically ok. Sick disgusting human beings. I cried for Americans because of their disgusting behavior…

We been lie too. Quit testing, open your businesses and unmask!

It would be this layman’s opinion that the people within the FDA who aided in killing Americans by withholding medication that would have saved thousands upon thousands of Americans.

I think there should be a MASSIVE NUMBER OF CLASS-ACTION LAWSUITS FILED against ALL of the MSM networks, NUTSY PIGLOSI, the FDA, Dr. Fraudci, and so on and so on!! These people caused the death of MANY INNOCENT PEOPLE who could have been saved by the use of Hydroxychloroquine, Zithromax and Zinc!! How many people would still be WITH US except for NUTSY PIGLOSI, et al!!!

What’s the big deal? Pelosi and her kind (Schumer, the little fat guy from the carnival, no neck with the bulging eyes, that psychotic Maxine Waters, and that bug eyed whatever she is, etc. I just forgot their names) are more interested in saving their political careers than saving any American life, or even anyone else’s, life. Who cares about people’s lives, as long as they can stay in power and rip off the taxpayers for their personal gain and pleasure. < (that’s a statement, not a question). Joe Biden must be doing a wonderful job so far, they’ve actually… Read more »

Don’t blame Americans and tell them to stop voting for these individuals. It wasn’t the people’s fault. Trump won Michigan, Wisconsin, Pennsylvania, Nevada, and Georgia.