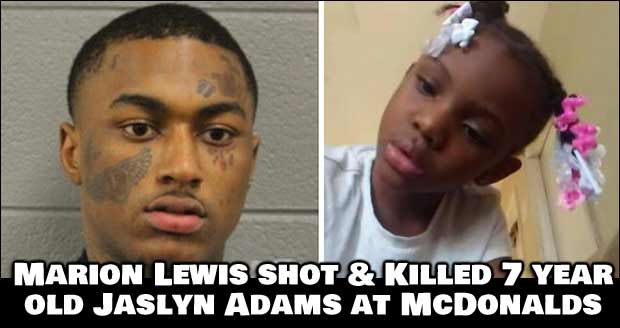 It happened in Chicago. Oh wonderful Chicago (sarcasm), Democratically run for over 80 years (mayor wise) and a complete sh*t-hole in many locations. A perfect example of what happens to a city when you let a Democrat run it for so long. Picture this, you’re in your car taking your 7 year old daughter to McDonald’s. She’s all happy and excited to be getting her favorite Happy Meal, especially because of the toy inside. While you begin to approach McDonald’s, and your daughter is quietly singing an unknown tune she made up in the back seat, what you don’t realize is something bad is happening and it’s coming your way as you sit in the drive through lane. 18 year old Marion Lewis was not too far away, already running from police. He had just crashed a car he was using to run from the police, and was loose on foot with authorities not too far behind.

In his desperation to get away from the police, he runs towards the McDonald’s where a few cars, including yours, is sitting waiting to order and get your food. 18 year old Marion Lewis is desperate to evade police so he pulls out a gun and attempts to car jack YOU. In haste and the frantic-ness of the moment, things do not move fast enough for Marion Lewis and he fires his gun multiple times. You get seriously injured, and your 7 year old daughter gets hit with 6 of the shots and soon after dies. … This is what JUST happened to 7 year old Jaslyn Adams and her father Jontae Adams. Please SAY HER NAME again; Jaslyn Adams. Jaslyn’s father was shot and seriously injured, while precious Jaslyn Adams lost her life. Moments before, 18 year old Marion Lewis was trying to run away from authorities on the Eisenhower Expressway (in Chicago) when he crashed his vehicle. He took off running and this was the end result. This took place on April 18th, 2021. He continued to evade police and then was involved in a police related shooting on I-290 4 days later on the 22nd. He was finally charged and arrested on the 25th and is now in custody.

So we have here a horrendous set of crimes, resulting in the death of an innocent 7 year old girl. Yes, both were black. To colorblind people, including myself, skin color should not be a factor. However in today’s environment, it sadly is. Looking at this from a conservative’s point of view, and using today’s atmosphere as a gauge, we will NOT hear about this incident as we would have it was a white male shooter, and a black victim. WHERE IS BLACK LIVES MATTER / BLM?? Why are they not down there consoling and helping the family? Where’s Al Sharpton?? Where’s Kamala Harris? Where is the phone call to the family from the President of The United States? Where are the main News / Media outlets?? CNN?? NBC?? Where’s Hollywood with their blue check marked tweets of support and financial donations to the family?? Where’s AOC? Where’s Maxine Waters?? Where’s Nancy Pelosi?? Schumer? Cuomo? .. Anyone with a word of support?? Was it mentioned the Oscars last night?? ……. Nothing but the sound of CRICKETS! … SAY HER NAME, Jaslyn Adams! … Thoughts or opinions? Please feel free to comment below.

Our Famlies are being destroyed by Evil hearts.
PRAYING for this family from such a senseless loss of a beautiful life.

Perv intentionally killed this sweet angel not just to hurt her father but for his own sexual pleasure. Cut off his balls, tar & feather him & LYNCH HIM!