This was written and posted yesterday by author Ronald F Owens Jr. on his Facebook page, which can be found here : https://www.facebook.com/ronald.f.owens . I think it pretty much sums up where we are at with the 2020 Election Results, and the massive fraud that took place, and what Trump’s options are presently down to. Will GOOD triumph over EVIL? .. Here is what appears to be Trump’s last hope. : 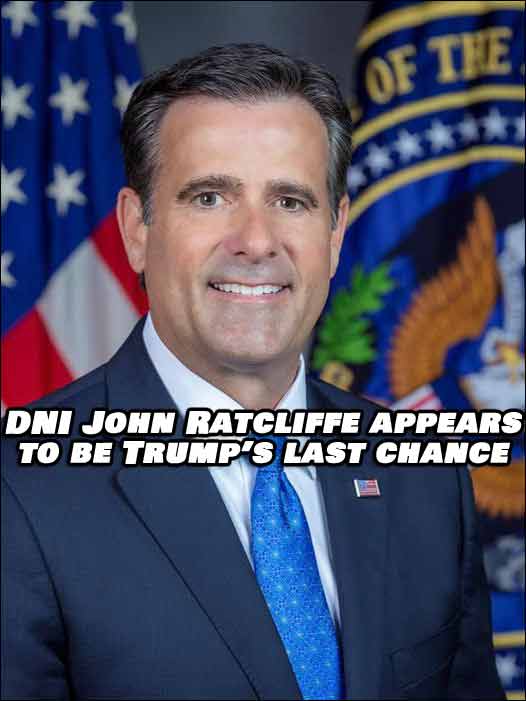 This is Director of National Intelligence (DNI) John Ratcliffe, and he has three more days to deliver a very important report to President Donald Trump.

DNI Ratcliffe’s report, which is due to President Trump and five cabinet members by Friday, December 18, 2020, will assess whether there was foreign involvement in the November 3, 2020 Presidential General Election.

Ratcliffe’s marching orders come from an “Executive Order [EO] on Imposing Certain Sanctions in the Event of Foreign Interference in a United States Election,” which President Trump issued (see source 1) on Wednesday, September 12, 2018.

Citing specific sections of the International Emergency Economic Powers Act, the National Emergencies Act, the Immigration and Nationality Act of 1952 and section 301 of title 3 of the United States Code, President Trump ordered that anyone inside or outside the U.S. who interferes with or undermines public confidence in United States elections shall be deemed as a national security threat and a foreign policy threat.

So any unauthorized person who accessed the election, interfered in the campaign infrastructure of the election, distributed propaganda about the election and is involved with disinformation regarding the election constitutes electoral interference.

Who is Ratcliffe and what is his experience? Ratcliffe was sworn in his position on May 26, 2020, he is the sixth U.S. Senate-confirmed DNI chief in our nation’s history (see source 2).

While representing constituents from Texas’ Fourth District, the former Congress member served on the House Intelligence, Judiciary and Ethics committees. The Southern Methodist University law school graduate and Norte Dame alum also served on the Committee on Homeland Security. In addition, he was chairman of the Cybersecurity and Infrastructure Protection Subcommittee.

So no later than 45 days after the conclusion of a United States election (which is this Friday, December 18, 2020), Ratcliffe —who is specifically qualified to be our DNI— shall assess whether a foreign government or person has acted as an agent of or on behalf of a foreign government to interfere with the 2020 Presidential Election.

Former federal prosecutor Sidney Powell, who defended Gen. Michael Flynn, cited several times the last several weeks that at least four countries interfered in our election last month. Sidney Powell, who is representing “We The People” in several election fraud lawsuits across the nation, identified (listed in ALPHABETICAL ORDER ) the Dominion of CANADA, the People’s Republic of CHINA, the Islamic Republic of IRAN and the Bolivian Republic of VENEZUELA.

Millions of inquiring minds are curious to know if there are other countries whose election interference is tantamount on an attack on the United States.

So the question that Ratcliffe’s assessment (report) will answer is who “authorized, directed, sponsored, or supported” people or peoples to rob the American people of their/our vote?

President Trump had incredible foresight, because 783 days before the November 3, 2020 Presidential General Election, our Commander in Chief issued this EO. It’s been posted on the White House’s website since then for all to see and read.

To my limited knowledge, no prominent MSM anchor, no well known MSM correspondent, no MSM recognizable pundit, no White House reporter has reported about it EO.

But now you all know.

I would encourage you all to know/learn more by reading source one so you’ll be that much more informed what will take place in the days/weeks ahead.

Thoughts? Please let us know in the comments below.

I pray that Joe Biden and Kamala Harris will not be our leaders. I pray for our brave Best President Ever Donald J Trump to lead us for 4 more years!

The problem is the swamp creatures have already delayed this report another 45 days which if I’m correct that will be after 1/20/21. I don’t know, we are getting F**ked every step of the way.