This Doctor Says Dirty Hospitals are Healthier Than Clean Ones, and He’s Right 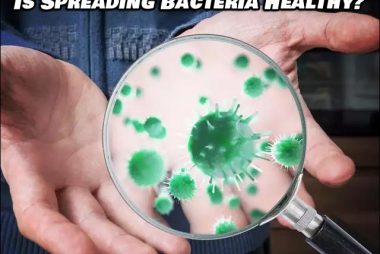 Is Spreading Bacteria Healthy? This one doctor thinks so!

Is this guy nuts? He’s proposing something that we’ve been doing the opposite of since medical care has ever existed (Antiseptic practices have been done since the late 1860’s). You would think that common sense tells you that keeping everything clean and sanitized is a very healthy thing to do, and many of us live our lives that way. In fact there’s some people that have OCD and are super ‘clean freaks’ about everything. All of a sudden comes this guy, Dr. Jack Gilbert, and he wants to dirty up our hospitals. That’s right, not clean and sanitize it, but ‘dirtier’. How did he come to this crazy conclusion, he studied dolphins. The results of his studies, which began back in 2014, proved that the dolphins were much healthier when the water was ‘dirtier’. And as the water got dirtier, the dolphins got even healthier. Dr. Gilbert is no slacker when it comes to his resume. He is the associate director of the Institute for Genomic and Systems Biology at Argonne National Laboratory.

Dr. Gilbert made it clear when he said “We saw the benefit in increasing the microbial diversity of the home.”. He explained how the absence of an abundant microbial ecosystem, notably in our hospitals, is probably Not helping. It probably is causing more damage than good. This ended up leading to drug resistant strains of mighty superbugs and infection-causing viruses. Dr. Gilbert is not alone with his beliefs. Ed Young, who is a major science writer, wrote about Gilbert in a book titled “I Contain Multitudes”. The book goes into the idea that bacteria are not to be looked at the way we always have. Yong says in his book “there are more bacteria in your gut than there are stars in our galaxy, and of these fewer than 100 species of bacteria compromise our health. The rest, which coexist in and among us, aren’t just harmless — they protect us and make us who we are.”

In fact, now don’t freak out, in just a single square inch of space, there exists BILLIONS of microbes. Even in the most remote locations of the earth, this fact is true. Microbes have been around on this planet a very, very long time before humans even existed. These tiny, itty, bitty f*ckers have been evolving and changing for billions of years. When humans did finally come around, the microbes and humans joined forces; Scientists refer to that as ‘co-development’ and they’ve proven that our bodies can not survive without all the billions and billions of microbes we host. Kind of freaky and creepy when you think about it, but they are necessary for all of life to continue on this planet. … COMMENT BELOW ..