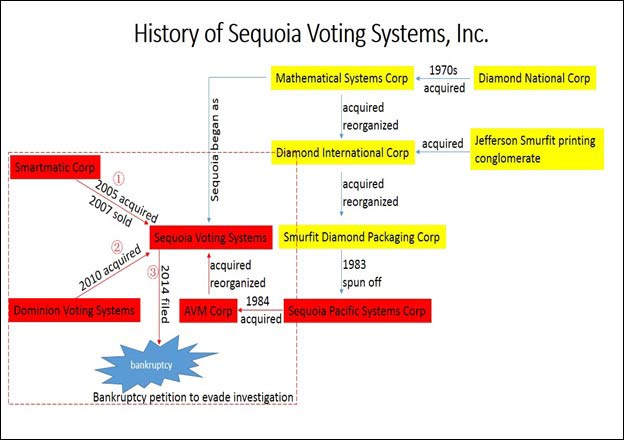 This article details background information regarding the present (and past) voting machine fraud, including companies Sequoia voting systems, Smartmatic, Dominion voting systems and Sequoia Capital China. This should shed light on their complex relationships and connections to each other.

AVM or Automatic Voting Machine Company
The Shoup Voting Machine Corporation was an American manufacturer of voting machines, founded in New Jersey in 1905 by Samuel R. Shoup. It changed names and locations over the years, before going out of business as Advanced Voting Solutions, Inc. of Frisco, Texas in 2015.

Sequoia Voting Systems
The company’s predecessor was a California-based company, and it was one of the largest suppliers of electronic voting systems in the U.S. In 1984, Sequoia Pacific Systems acquired the voting machine business of AVM and reorganized it as Sequoia Voting Systems, Inc. Under Sequoia’s ownership, the AVM was certified for use in several states in 1986 and 1987, with sleek new packaging, it went to public in 1990 as Sequoia AVC Advantage DRE voting machines.

Smartmatic
On March 8, 2005, Sequoia was acquired by Smartmatic, a multi-national technology company which had developed advanced election systems, voting machines included. Since then, Smartmatic has dedicated much of its development and management team to modifying some of Sequoia’s older, traditional voting machines, and replacing their technology with avant-garde proprietary features and developments, which resulted in new, high-tech products.

Dominion Voting Systems
The company was founded in 2002 in Toronto, Ontario, Canada, by John Poulos and James Hoover. Dominion is the second largest seller of voting machines in the U.S. In 2016, their machines served 70 million voters in over 1,600 jurisdictions. In 2019, the state of Georgia selected Dominion Voting Systems to provide its new statewide voting system beginning in 2020. In June 2010, Dominion acquired Sequoia Voting Systems.

Neil Shen and Sequoia Capital China
Shen is a naturalized Singaporean businessman, and is a member of The Chinese People’s Political Consultative Conference since 2018.

He is the Founding & Managing Partner of Sequoia Capital China. Before joining Sequoia, he was a well-known entrepreneur, co-founder of the travel site Ctrip.com (NASDAQ: CTRP) and Home Inns (NASDAQ: HMIN), and also worked as an investment banker at Deutsche Bank Hong Kong, Chemical Bank, Lehman Brothers, and Citibank.

Sequoia Capital China was established in 2005 as an affiliate to the U.S. firm under the leadership of Shen. Since 2005, Sequoia Capital China has invested over 200 Chinese companies, many of which that perform internet related tasks and listed in NASDAQ or HKEX, such as Alibaba, JD, PDD, and MEITUAN. The investment has been so successful and done in such a large scale that Sequoia Capital China is purported to have bought up half of the businesses that make up China’s internet industry.

Opinions?? .. Drop your comments below.