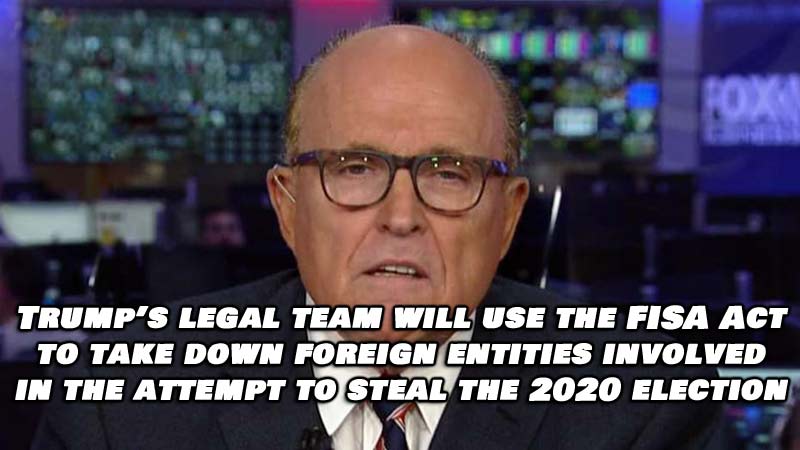 Rudy Giuliani, part of Trump’s legal team, was just interviewed by Fox News Anchor Maria Bartiromo. Giuliani explained that Dominion, to avoid detection of their fraud, sent all the ballot data out of the country, which is quite shocking. What Dominion did was interfere in American elections; most recently the 2020 Presidential Elections, and that is a matter of national security. That alone makes this case requires the use of the FISA Act (Foreign Intelligence Surveillance Act). Dominion used software which was custom developed by a company named Smartmatic. It’s such a small world because we found out that the chairman of Smartmatic is a close business partner of George Soros. The company has very close ties to Venezuela and the CCP (Chinese Communist Party). The company was founded by the former President of Venezuela, Hugo Chavez, who supposedly used the software to win his own election. The business is still tied to Chavez because 2 of Chavez’s business partners still own the company. They have used the software to commit fraud in the South American elections multiple times.

The same systems (Dominion and Smartmatic) were used here in the United States during this past 2020 Presidential Election. The systems were present in 30 states. Rudy Giuliani stated that in Pennsylvania, they found over 632,000 illegal ballots. That number of illegal votes is enough for President Trump to win by more than 300,000 votes in that state. It also happened in Detroit. About 100,000 ballots were carted in at approximately 4:30am, and were then counted. Every single one of those ballots had only Joe Biden’s name marked on it. Not a single other name was chose for any of the lesser races. Not even on the Democrat side. Strange, no?? This is because Dominion did what it was designed to do, the system indicated Joe Biden was so far behind that ballot counting had to actually be stopped; Completely halted, which has NEVER happened in a previous election. If Dominion was not there to do ‘its thing’, then the election would have been called for Donald Trump.

Who is behind Dominion, and who finances Dominion and Scytl? Sequoia Capital! (Who was involved in a 2011 NJ Voter Fraud situation) . Who is Sequoia Capital? None other than Neil Shen, the ‘King of the Internet’ in China. Mr. Shen works the voting software gig on behalf of the CCP. The ‘top of the chain’ behind Dominion is the CCP (the Chinese Communist Party). That is the center of the problem, and has been for decades. This why Trump’s legal team is using the Foreign Intelligence Surveillance Act (FISA act), and going through the FISA Court, instead of going through the regular legal process. So far, every piece of information that Mr. Giuliani mentioned that has to do with national security of the United States, has been done by the direction of the CCP. Their obvious intent was to manipulate the US Presidential Elections so that Donald Trump did NOT get re-elected.

The FISA Act and FISA Court

The FISA Court (FISC) is a U.S. federal court established and authorized under the FISA Act in 1978. The Federal Supreme Court appoints the judges of the FISA Court. Because it involves sensitive national security information, the FISA Court operates secretly, much of which you can NOT find online.

By Trump’s legal team using the FISA Act, it takes the election litigation out of the bipartisan spiral. This actually is in President Trump’s best interest. Since he is already in the position of President, he has the state apparatus at his disposal, and he can use surveillance if it is related to national security. This is the most powerful weapon Donald Trump has in this situation. All the evidence gathered can be used in a FISA Court. The President does not have the same advantage if he chooses to prosecute the individuals or partisan election fraud in a normal court room.

The FISA Court is not like a regular court. It is a completely secret court. There is no jury, even sometimes there are no witnesses, and no access to hard specific evidence, only intelligence. It depends on the source and credibility of that information and whether multiple pieces of information support the same fact. As you can see, this differs tremendously from a regular court.

The power of the FISA Court is almost as strong as the Supreme Court. There is no jury, the judge directly decides the case, and the verdict is final; No Appeals. The hearings that take place are NOT open to the public. Regular folk like you and I are only allowed to see part of the redacted information, but never the whole story. Due to the confidential nature of the proceedings, usually only attorneys licensed to practice before the U.S. government are allowed to appear in court; No Media, Journalists or Spectators are allowed.

The United States has this system in place for cases against national security. That is the FISA Act. Under the FISA Act, the FISA Court can authorize surveillance on three different categories of people. The first ‘category’ is a foreign intelligence officer (FIO). As soon as you apply for a surveillance warrant in a FISA Court in which you claim that the person is a foreign intelligence agent, you can immediately put that person under full surveillance. You can do surveillance 24 hours a day, 7 days a week. Even if this person fled to a country like North Korea or Venezuela, the monitoring can and will still be carried out, by any means necessary. All information gathered from the surveillance can be used as evidence in court. The 2nd ‘category’ is anyone in contact with this foreign intelligence agent, even if it is a U.S. citizen, will also be fully monitored. The 3rd category, if that same U.S. citizen is in contact with any other people, those people are also under full surveillance. Once this case has been filed, all the persons contacted by this ‘foreigner’ will be monitored & surveyed. All surveillance contents collected will be given over to the court.

In a regular U.S. court room, your surveillance would NOT be admissible as evidence. However a FISA Court can use the evidence. That is the power of the FISA Court. FISA Act can effectively prevent all acts of infiltration or subversion of the United States and protect U.S. national security.

The FISA Act is a net that will take down all these companies and people involved. The most critical part of the war against the CCP (who is the real force behind all the voter fraud here in the United States) is the destruction of the swamp. In this fight between good and evil, Rudy Giuliani is fighting a great diversionary legal battle. FISA Act allows President Trump to declare a state of national emergency which should make for the the evidence collection to go smoothly, quickly, and efficiently.

In addition to the Rudy interview, Lawyer Sidney Powell was also questioned. Powell said that the legal team already had a mountain of evidence. “We have sworn witnesses who know the whole story of this fraud and how the Dominion Voting System was designed to manipulate the election. They can control the election remotely from Germany and Venezuela. They can see the vote counts in real-time, and they can tamper with the votes. I will never say anything that we can’t prove. The Dominion software was designed with the intent to rig the election.” She continued, “We’ve got so much evidence; it’s like spewing out of a fire hydrant.” Sidney Powell can prove that they can insert a USB drive into the machine, or remotely upload the software ‘patch’, that issues commands and instructions over the Internet. This all can be operated on from Germany or Venezuela, or anywhere in the world. They can see the vote counts in real-time, and they can tamper with the number in real-time. This all will be proved in court, even though people are calling to see the actual evidence but whay they don’t understand is that it needs to be presented in court first before it can be made public.

Sidney Powell went on even further “We have the sworn testimony of a witness. This person was fully aware of how the system worked, and he understood the intent behind the design of the software. He also witnessed what happened after the vote count stopped. This tactic has been used before in other countries, and this is truly explosive information”.

Do you think Trump’s legal team will be able to successfully prove that Donald Trump was and is the winner of the 2020 Presidential Election?? … Feel free to comment below.

This is the best news I have herd in days. I finally have some hope. I am so glad you’re link was posted on Parler. I now have another good source for the truth. Thanks and God bless.

All who are involved including democrats and those who THREATENED AGAINST AMERICANS such as AOC who said we need to make a list of trump supporters, need to be in prison. America is a REPUBLIC! America IS NOT A SOCIALIST COUNTRY! AGAIN! AMERICA IS NOT A SOCIALIST COUNTRY! Never will be A socialist or communist country, why? Americans LOVE FREEDOM! We love our Constitution we are LAW ABIDING CITIZENS! Criminals need to be in prison!

I can’t wait for KARMA to come bite all the liberal democrats in the ASS!
I thank God that President Trump and his Legal Team keep fighting for the truth and expose the lies and deceit of all the Democrats, the media, and China.
Make them all Regret trying to pull off the biggest criminal Heist of trying to stealing the American 2020 election.
#Trump #4 MoreYears