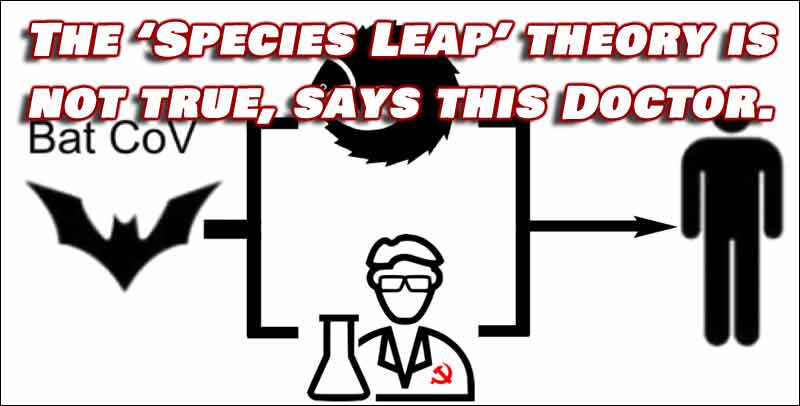 On December 14th, and ‘opinion’ piece was written and published in La Stampa, one of the oldest newspapers published in Italy. The piece (on the origin of Covid-19 virus (SARS-CoV-2)) was written by Dr Stefano Giraudi, who happens to be a cardiologist in Milan, Italy. He presently works at S. Raffaele Hospital in Milan.

Dr Giraudi has argued that the concept that the COVID-19 virus came from nature, and performed what is called a ‘species leap‘ from animal to human, is NOT TRUE. This ‘species leap’ was explained in publication named ‘The proximal origin of SARS-CoV-2‘ which was featured by ‘Natural Medicine‘. Dr Zheng-Li Shi, whose theory it is about the ‘species leap’, created the “RaTG13 virus” just to test this theory. The scientific establishments of the world have taken a shining to the ‘species leap’ theory and discount any thoughts of it being ‘made in a lab’. However Dr Giraudi believes that they only hold this point of view because there is a tremendous interest in keeping the ‘fear’ alive due to the monies generated by drugs, research and also the control over people. It would sort of like curing cancer. Do you have any idea how many business would be shut? Do you have any clue as to how much money would stop flowing to the medical industry if cancer was cured? … Same logic here.

We have translated the article as best as we could. It appears as if it’s titled ‘Coronavirus and research laboratories, there is no definitive proof of the “species leap” from animal to man’. The translated article is as follows :

In March 2020, the media released the letter from the American biologist Kristian Andersen to the journal Nature [Medicine]. It was only a letter and not a publication in which Andersen presented the results of a research on the gene sequences of a coronavirus found in the pangolin (also called scaly anteater) and that of a species of bat (a ”Horseshoe” bat), very similar to Covid-19, and they had come to the conclusion (probably a bit hasty) that the hypothesis of a “species leap” from animal to man at the origin of the pandemic, was very likely.

I have examined their arguments, also with the help of the analysis made by an Italian molecular biologist, and I have come to the conclusion that the hypothesis of ”natural” mutation and ”species leap” is not at all convincing. Andersen’s study does not explain how, when and where the virus mutation occurred. We now know that, in a BL 4 level laboratory, (such as the Wuhan Institute of Virology), a virus can be disassembled and reassembled in its genetic sequences in infinite ways. In any case, neither the reservoir animal, that is a species of bat affected by a Coronavirus equal to 100% equal to Covid-19, nor a possible intermediate host (no pangolin affected by Coronavirus), in which the mutation responsible for the species jump could have occurred.

This is also an important anomaly compared to past pandemics such as SARS and MERS where the animals responsible for the ”species jump” had been identified. In short, the definitive proof is missing. The rush of illustrious scientists to embrace the thesis of Andersen and colleagues is therefore surprising.

Just as a diplomatic war is underway between the US and China over the spread of the virus, so in the world of science there is the goal of defending a single truth about Wuhan (the natural “spillover” of the coronavirus from animal to man). One reason, I fear, is to protect the enormous interests that gravitate around research, particularly drugs and vaccines.

Knowing how the CCP operates, I’d be surprised if Dr Stefano Giraudi isn’t arrested in the next coming days … Because that is how Communist China works. if you speak against the CCP, they just remove you from existence.

What are your thoughts on this? Did the virus come from a Species Leap, or was it man-made?? Please let us know in the comments below.