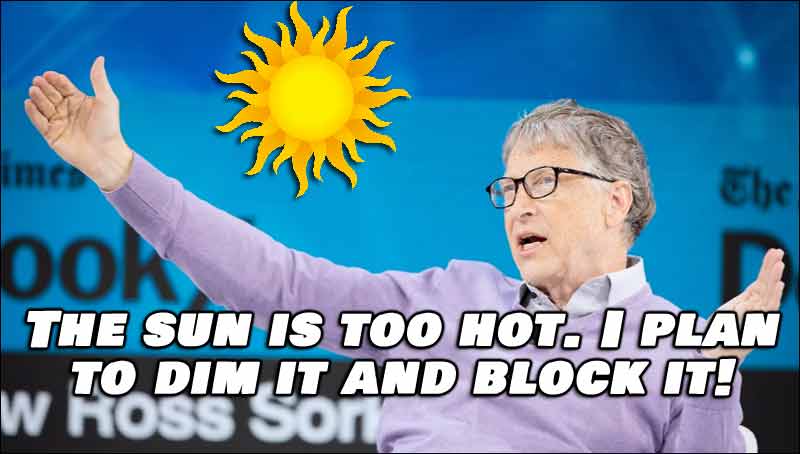 In going with the whole Global Warming & Climate Change theory, here comes the next doozie. Logically, it sounds like the right thing to do (but in reality, it’s not), let me explain. If you have your fireplace on, and it’s nice and roaring, where you were able to stand comfortably before, may not be so comfortable now due to the large amounts of heat radiating from the fire in the fireplace. So, being that you don’t want to burn, you’d step back a bit to create more of a distance between you and the heat source (simple logic). This would create a farther distance the heat needs to travel to get to you, so it would be ‘less hot’ by then, or not be able to reach you at all. Either way, you are reducing the heat that is reaching you. If it was a gas fireplace, you could simply ‘turn down’ the gas to lessen the flame, thus lessening the heat it generates. Kind of like having a ‘dimmer’ for your fireplace. Well hold on to your seats now kids because Bill Gates, yes the disgustingly wealthy dude who owns Microsoft and a ton of other things, along with vaccine research and development firms, wants to dim / block / redirect the suns rays and is actually funding a plan that will make it a reality. Or try to at least.

Bill Gates has funded a geo-engineering plan that is presently a Harvard University study. The project, and I quote, “plans to test out a controversial theory that global warming can be stopped by spraying particles into the atmosphere that would reflect the sun’s rays.”. Global warming supporters are ecstatic, but nay-sayers are condemning this and some are calling for immediate studies to test the safety of these ‘particles’ that they want to spray into our atmosphere.

The Western Journal’s (source at bottom of article) Douglas Golden stated “While you may have been paying attention to [Gates’] efforts on vaccination and lockdowns, you may not have noticed that one of Gates’ most controversial causes just got a go-ahead: A project that would help block out the sun.“

A report from Reuters stated “Open-air research into spraying tiny, sun-reflecting particles into the stratosphere, to offset global warming, has been stalled for years by controversies — including that it could discharge needed cuts in greenhouse gas emissions. In a small step, the Swedish Space Corporation agreed this week to help Harvard researchers launch a balloon near the Arctic town of Kiruna next June. It would carry a gondola with 600 kg of scientific equipment 20 km (12 miles) high.“

A publication named Nature released a more ‘understandable’ version, “The idea is simple: spray a bunch of particles into the stratosphere, and they will cool the planet by reflecting some of the Sun’s rays back into space. Scientists have already witnessed the principle in action. When Mount Pinatubo erupted in the Philippines in 1991, it injected an estimated 20 million tonnes of sulfur dioxide into the stratosphere — the atmospheric layer that stretches from about 10 to 50 kilometres above Earth’s surface. The eruption created a haze of sulfate particles that cooled the planet by around 0.5 °C. For about 18 months, Earth’s average temperature returned to what it was before the arrival of the steam engine.“

However there is the flipside of the coin, opponents have called it a “slippery slope toward engineering the climate.”. A Swedish environmentalist, Niclas Hällström of WhatNext?, said “There is no merit in this test except to enable the next step. You can’t test the trigger of a bomb and say ‘This can’t possibly do any harm.‘” And that there is a “potential to change rain patterns or crop yields.”

Since the news about these tests and their goals became public, a large number of people want the tests actually stopped first, and immediately prove that they are going to be safe to be conducted. We are talking about injecting particles into air we may possibly breathe-in, and there are a whole other mess of things to be concerned with too, such as the fact that Bill Gates is involved in this makes you really think what else can he be planning to spray into our atmosphere. He is the same guy who stands behind and supports population control. … Your thoughts? Feel free to comment below.