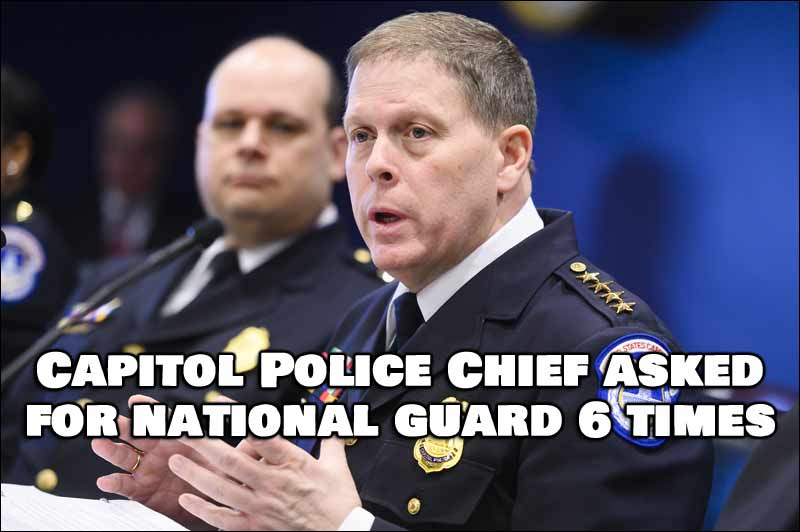 On the day of January 6th, at the Capitol Building in Washington DC, when all hell broke loose by the actions that took place, the then Chief of Capitol Police, Steven Sund, stated in a recent interview that he called for backup from the National Guard but his requests were denied by his security officials. Sund explained that Paul Irving, the Sergeant at Arms, refused to agree with Sund, and rejected requests to declare a state of emergency. Sund also said that he made his requests for the National Guard 6 (six) times, but they were either denied or put off (delayed). From watching videos and constructing a timeline, it only took about 15 minutes for the perimeter to be ‘breached’ (even though we’ve all seen at least 2 videos of police opening outside gates for the protesters to walk right through). Sund confidently believes that if his pre-demonstration requests were approved, it’s quite possible that none of this would have happened.

Sund isn’t the only one that feels this way. Terrance Gainer, who is the former police chief of the Capitol Hill Police, came to Sund’s side and defended him. Gainer also admits though that there are still many, many questions that need to be asked and answered. “There’ll be plenty of time to examine and persecute the people who mis-defended that place. I used to do that, I know these people. We are responsible. Something got screwed up and someone will be held accountable.”

According to reports from people there on the scene, by the time the National Guard got there and mobilized, 4 of the 5 deaths had already occurred. Even though Sund stands by his actions, the RATS within the Democrat party have openly slammed him and called for his resignation. Sund gave in on January 7th, 2021 by submitting his letter of resignation, as seen in the included image. … Thoughts? Drop your comments below. 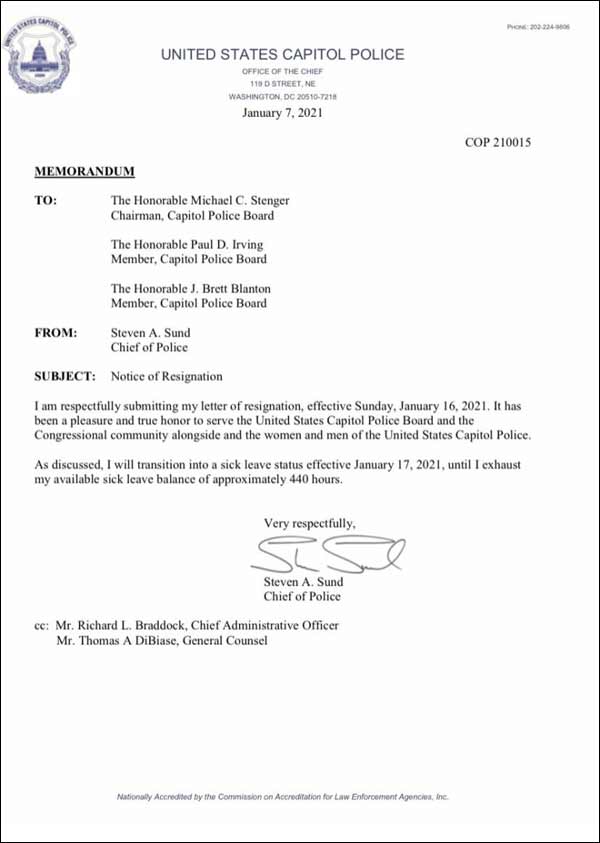 Who in the world has 440 hours of sick leave.

Someone who has dedicated their life to selflessly serve, I guess.

I had 94 days in my sick bank when I retired. Only got paid for half of them. Doesn’t pay to save them up.

Someone who never calls in sick.

Democrats ask forcefully for his resignation? The Democrats set this up! It was a Democrat plot to hurt the President.

More underhanded and criminal action lay at the feet of PELOSI and her followers within the DEMOCRATIC party..and the TURNCOAT Republicans who stood with her!!!!

There are way too many unanswered questions. The evidence is mounting that the riot was planned by the democrats.

He was paid to resign, easy to see that

It can’t resign you have to stand there and fight back. Every time you resign there’s always a rat to come crawling in. I gave money to help fight for the senate in Georgia and one good didn’t do me four times I gave I couldn’t afford to do that but I did it and why because I wanted to help save my country but the two people I’m throwing my money at went out like a bunch of cowards they knew those machines were fraudulent they knew later they would come up with those boats even burn the damn… Read more »