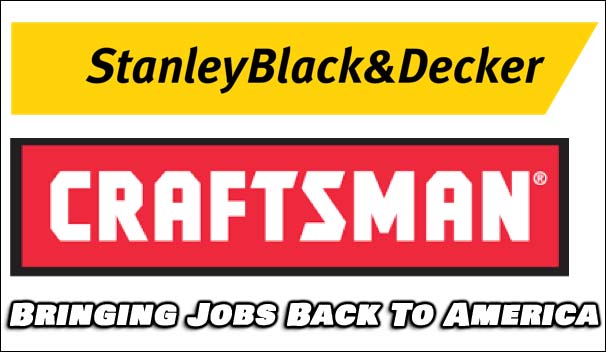 Located in Shenzhen China sits a manufacturing plant for Stanley Black & Decker. The facility was home to 1,194 employees, and boasted about $150,000,000 (150 Million Dollars) worth of assets, along with $300,000,000 (three hundred million dollars) in sales. Although that facility in China has just closed and is joining a long list of companies bringing back manufacturing (and jobs) to the United States of America. Stanley Black & Decker is based out of Connecticut, but Stanley & Black Decker Precision Manufacturing Shenzhen Co. Ltd was a Chinese unit of the company.

A high ranking manager of the Chinese division Stanley Shenzhen said, “I have been working for more than 20 years, and it is the first time I have ever seen such a high severance compensation. It can be said that no one in our factory is sad.” To avoid getting heat from the Chinese government, the manager had to lie to the public: “The factory will move to Suzhou”, which is a huge blatant lie. The manager continued “The factory will move to Suzhou and merge with Stanley Black & Decker (Suzhou) Power Tools Co., Ltd. after dissolution. We have been here (Shenzhen) for ten years. The lease term will end next year. The rent has risen too high. Now it costs 38 CNY per square meter, which is simply unacceptable.”

According to Dr. Cheng Wanli’s report, CCP’s Department of Labor shamelessly said that Stanley’s high severance pay was to buy Chinese people’s support and set traps for other Chinese companies. They also claimed that the part of the over-payment was not valid, and the company should take it back. China Labor Law clearly states that the interests of dismissed employees should be legally protected. However, it can be seen from CCP’s comments that even the standard severance compensation cannot be honored in communist China.

Due to the trade war with China and insecurities of supply chains due to COVID-19, U.S. companies are moving their manufacturing operations back to the U.S. from China, which is great for Americans. It means Jobs, Jobs, Jobs.

In May of 2019, Stanley Black & Decker announced that it planned to move production of Craftsman wrenches, ratchets, sockets and more back to the United States from China. The new plant will be based on a 425,000-square-foot facility in Fort Worth, Texas, and projected to be running in late 2020. About 500 people will be employed at the new $90 million facility, which will be using robots in the forging presses to boost output compared to the older forging machinery now used in China. This will keep quality high while keeping production costs in-line with those in China, according to the Wall Street Journal. … Opinions? .. Drop Your Comments Below.