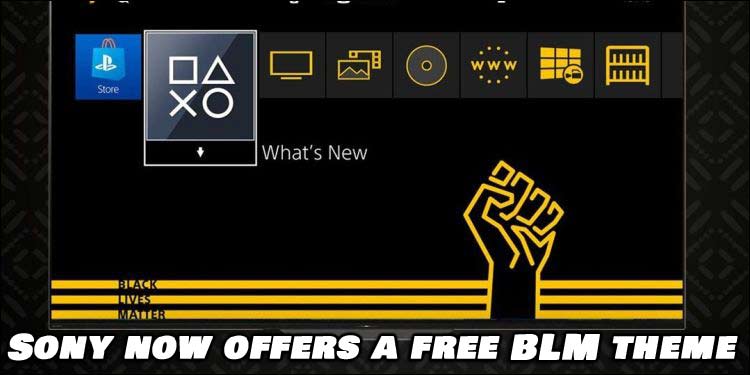 As if it weren’t enough that so many companies have already ‘Got Woke’, here comes another major player that is following suit. Sony just announced that are offering for free on their PS4 (PlayStation 4), a new Display Theme based on the support of Black Lives Matter (BLM). The PS4 has built in display ‘themes’ (visuals that ‘dress up’ your User Interface) and one of the Themes now offered for Free is based on BLM (Black Lives Matter) to show Sony’s support. Now we already wrote an article about which companies have Got Woke, there were over 275 of them and Sony was already on that list, but not for this latest PS4 stunt. Sony also recently announced the upcoming release of their new console, the PS5. As of the writing of this, it is not confirmed whether the PS5 will offer the same or similar Themes.

Now don’t get me wrong, we are all about equality for every single American Citizen. We 100% believe that All Lives Matter, no matter what your skin color is; WE ARE ALL HUMAN BEINGS. Although the ONLY ‘people’ I could honestly keep off the list would be murderers, rapists, pedos, and the like; Their Lives Do Not Matter to me. But when I see video after video of BLM ‘protests’ turn into city wide destruction and violence, including murder, that’s when I draw the line. When I see some of these Black Lives Matter rioters beating innocent bystanders, even the elderly, that’s where I draw the line. When I see utter chaos and bloodshed from a bunch of ignorant, uneducated BLM supporters, that’s where I draw the line.

So when I see a company or business that is displaying support for this MADNESS, I can’t really understand what they are thinking. Isn’t it racist to have a Display Theme on your PS4 that supports only one single race? What about the other races? Will Sony be putting out a White Lives Matter theme on their PS4? What about a Latino Lives Matter? … What about ALL LIVES MATTER? … You get where I’m going …. Have an opinion? Drop your comments below.

This Native American is frankly sick of these companies endorsing these racists, Marxists slobs and will not be buying any Sony Products that is how I show my displeasure they do not need my business when they support rapist, gang members, murders, and racists. They are virtue signaling a toxic ideology.

I agree100%. If anyone should be compensated it’s Native Americans. Everything has been stolen from them. They have been murdered, abused and lied to for hundreds of years. They are still being discriminated against even today.

Blm is a communist group funded by satanic globalists.

Its nothing to do with black lives and if they matter.

They love the aborting of black babies.
They love to get black people fired from the police force.

It’s ridiculous and disgusting that Sony would allow this hateful Marxist propaganda on their platform. We all know what it is. I was thinking about buying a PS5, but I’m realizing there are so many more productive things I could be doing with my life. Thanks for ruining gaming by putting political propaganda on your platform Sony. It’s not fun anymore when I have to constantly be reminded of all the senseless murders and arson attacks that happened this year