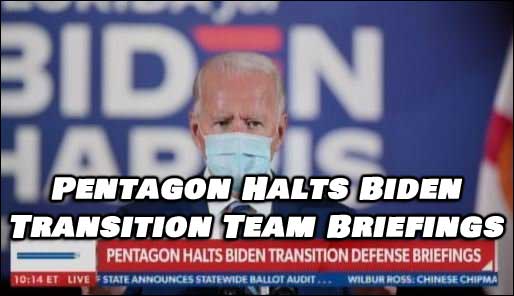 Friday morning, December 18th, 2020. What seems to be big news was just released, and it’s about the fact that the Pentagon is stopping all briefings with the Joe Biden Transition Team. The Transition Team is usually informed of up-to-date happenings in and outside of the country before they come in and take over power. It is to prepare the next administration coming in so that they can do their job correctly from day one.

Joe Biden, his admistration, and the entire Liberal base has been touting that ‘Joe Biden Won!’ when it isn’t even January 6th yet. I’m tired of telling the other side that “It’s not over yet!” … and to help make my claim, here comes the U.S. Pentagon telling the Transition Team of Joe Biden that they are STOPPING all briefings with them.

The exact report came from Axios, and reads :

Behind the scenes: A top Biden official was unaware of the directive. Administration officials left open the possibility cooperation would resume after a holiday pause. The officials were unsure what prompted Miller’s action, or whether President Trump approved.

Why it matters: Miller’s move, which stunned officials throughout the Pentagon, was the biggest eruption yet of animus and mistrust toward the Biden team from the top level of the Trump administration.

What happened: Meetings between President Trump’s team and the Biden team are going on throughout the government, after a delayed start as the administration dragged its feet on officially recognizing Biden as president-elect.

Then on Thursday night, Miller — who was appointed Nov. 9, when Trump fired Defense Secretary Mark Esper right after the election — ordered officials throughout the building to cancel scheduled transition meetings.“

What do you think? Is this a sign of things to come? Is Biden done for?? .. Please let us know your thoughts in the comments below.

I certainly hope so this corruption and deceit the fraud the stolen election!! We can’t trust the democratic Party ! Joe Biden is a threat to our country and we need to protect at all cost!!

true The Democrats are not Americans as they are one worlder people.

They are Communists!… the whole lot of them and they need to go. Look at Pelosi putting someone on our intel team who has been compromised and she thinks nothing of it. Look up the “45 Communist Goals”. It was introduced into Congressional record in 1963 after an FBI Agent came upon it during an investigation and found it disturbing. You tell me what political party it sounds like has been performing the objectives. We must protection this Nation at all costs or she will be gone, and soon. It is already far underway. Toppling our statues, Destroying cities, rewriting… Read more »

Does anyone have an idea weather the “conclusion of the US elections” would be on the day after the election or when its certified? With states doing “recounts” would the election still be considered concluded?

Fingers crossed that Biden and his ultra-crooked cronies are DONE!

Biden will sell us out and go to bed with China! The whole lot of them are a bunch of stealing, lying, bought and paid for democrats, who haven’t done anything for this country since President Kennedy was in office! Drain the swamp!