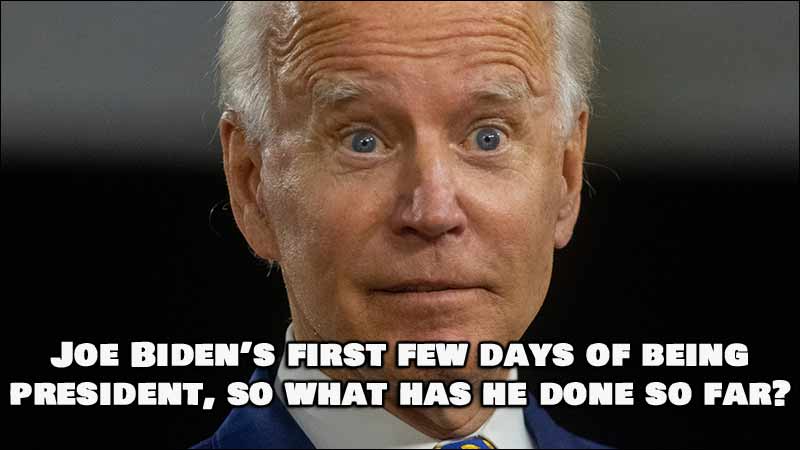 Joe Biden ran his presidential campaign on multiple ideas; defeating the pandemic, build back better, and helping the middle class. It’s been a little over 3 1/2 days since he has taken the Presidency. Let’s take a look at how he’s doing. Shortly after being inaugurated, he signed 17 executive orders that essentially rolled back the ones that Trump signed as President. The first one was to rejoin the W.H.O. (World Health Organization). This is the same exact organization that covered up for China when the coronavirus pandemic first broke out. The same organization that has always heavily relied on American funding.

The next executive order put the United States of America right back into the Paris Climate Agreement. If you listened to the reasons why President Trump pulled us out of it, you’d know that the organization is heavily funded by America, which basically allows us to pay for other countries to lower their emissions. However, the 2 largest polluters in the entire world, China and India, get a waiver through 2030 where they do not need to participate in controlling or limiting their emissions / pollution. (WTF? Who in the hell would sign that and/or want to be a part of that??)

Another EO signed by ‘President’ Biden was to get rid of the travel ban from Muslim countries that have known ties to terrorism. The next EO will bring a stop to building the wall between Mexico and the US, and will also put a stop to deportations for any illegal entering the country. Biden also put the kabash on the Keystone XL Pipeline, which instantly killed tens of thousands of jobs. Biden also promised now to end all Fracking, which is a complete reversal of what he ran on. Their union actually supported Biden during his campaign, yet he just turned on them. According to GlobalEnergyInstitue.org, if the Fracking industry is shut down, over 15,000,000 (15 MILLION) people will be out of work. (Source : https://www.globalenergyinstitute.org/new-energy-institute-report-finds-us-could-lose-nearly-15-million-jobs-if-hydraulic-fracturing) .. When asked about the loss of jobs, Biden’s Transportation Secretary nominee Pete Buttigieg said they can get ‘different ones’. Note that the oil still needs to be transported. So now it will be moved by truck, containers, ships; ALL WHICH BURN FUEL, RELEASE EXHAUST FUMES, and have a higher risk for accidents.

With the Coronavirus, Biden told his followers multiple times that “trump has no plan. But I do”. Even Kamala Harris jumped on that bandwagon, yet on his third day as President, Biden says to the entire country through national TV “There’s nothing we can do to change the trajectory of the pandemic in the next several months.” And of course they, including Dr Flip-Flop Fauci and the new press secretary, are blaming the Trump administration for “leaving the cupboard bare”. But wait, THEY were the ones in the first place that said Trump has/had no plan, so if that was true, how could Trump have left them anything?? DUH! Trump had a plan, it was called Operation Warp Speed and it’s the reason why we have vaccines already in the first place.

‘President’ Joe Biden put in a call to the President of Mexico to discuss his plans on trying to curb the slow of caravans that travel from Guatemala and Honduras (um, we already had an idea, THE WALL) which travel through Mexico to get to and enter the United States illegaly. Biden’s plan? Send Guatemala and Honduras $4,000,000,000 (Four Billion Dollars) to help them create jobs and education. Biden believes that will end the migration of people leaving those places. I’m not sure if Biden knows this but things like that have been tried in the past and have never worked out. Corruption also makes it’s way in and the monies never get to where they are supposed to go. And why do we keep sending tons of cash overseas??

Other executive orders signed include one that now allows transgender athletes to compete in women’s sports, and also serve in the military. Now while I am for equality for all, this really stretches it because there is an obvious physical advantage for men over women in many sports. It also allows for transgenders to use the bathrooms and locker rooms of ‘the opposite sex’. Yes, being a transgender now makes them one of the opposite sex’s in their eyes, but it’s not the same view that everyone has. It’s hard to accept your mom or daughter in the same locker room, or bathroom, or clothes changing rooms, as a big hulking hairy dude than now wants to be referred to as “Sharon”. (I know, I am stereotyping, but it’s just for an example. Point is many people do not feel comfortable and it should NOT be forced upon them.)

A 100 day national mask mandate is now in effect too, although Joe Biden and his press secretary have already been busted not wearing one while being on Federal Property (which is one of the places that the EO requires you to wear one). When the press secretary was asked why Joe Biden was not wearing one, she responded “He was celebrating.”. There’s STILL riots going on by Antifa in Portland and Seattle, and Biden has done nothing to stop them. A new COVID stimulus / relief plan (1.9 Trillion Dollars worth) was promised, but now supposedly we won’t be seeing anything from it until March.

That’s about it for now, I’m sure I am forgetting things, but these were the major ones I kept notes on. Joe Biden is a joke. He’s far from Presidential material. … Have an opinion? Please feel free to drop a comment below.

He is probably not even running the country. lol.

Definitely a puppet. Pelosi and Schumer are pulling the strings for China….

Ole’ Sleepy Creepy Joe at his finest…
Make no mistake. He will be trying to ban firearms next. They will try the AR-15 first and then attack ALL GUNS. It’s not about crime. It’s about control.
They want to disarm the public so they can carry out their agenda.

i want to know why I got an email from FEMA offering a free course on Disaster Preparedness , now that made me feel like something bad is about to happen, that we need to prepare for ! Oh and it is administered by Homeland Security (What the hell is happening to us (US) ?!!