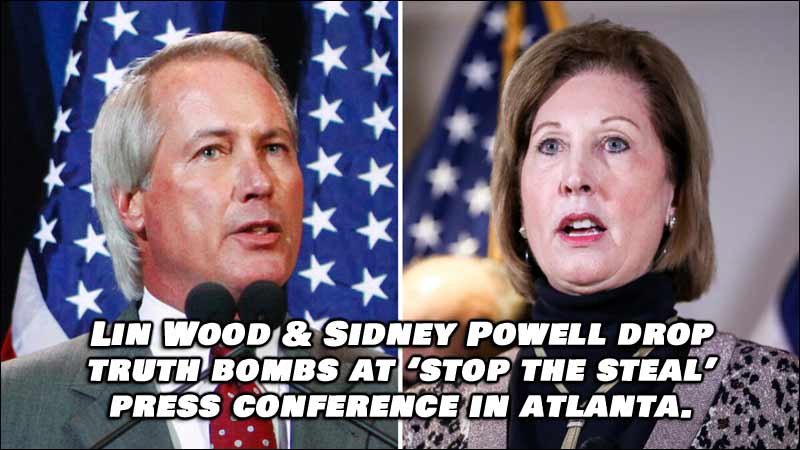 Earlier today, at around 2pm, attorneys Sidney Powell and Lin Wood took to the public stage in Atlanta, Georgia to discuss their legal cases and the voter fraud / election fraud that took place in the state of Georgia, and several specific areas within Georgia where the fraud was outrageously high. The press conference was called ‘Stop The Steal‘. The lawyers push seems to be to get the state to de-certify the election results (experts feel the state was premature in certifying the election), which would then stop Governor Kemp (RINO/traitor) from transmitting those certified votes to the Electoral College. (Video Below)

Their requests include verifying every single vote and ballot cast, as to weed out all illegal and fraudulent votes. Then count the legitimate ones, leaving the REAL winner to be announced. I honestly believe their ‘complaints’ will fall on deaf ears when it comes to Governor Kemp. He’s already shown his true colors to be blue instead of red.

There’s over 1 and 1/2 hours of video here (see video below), and there’s a lot to be STUNNED about. Again I’ll say it, just like I said it on the legislature hearings in Pennsylvania and Michigan with Rudy Giuliani, how anyone can watch these hearings / conferences and then say there is no proof of voter fraud is beyond me. Those people are just in blind denial. There’s no other excuse because the evidence had been laid out right in-front of you, you just have to spend the time to watch it.

Have an opinion? Please leave your comments below.