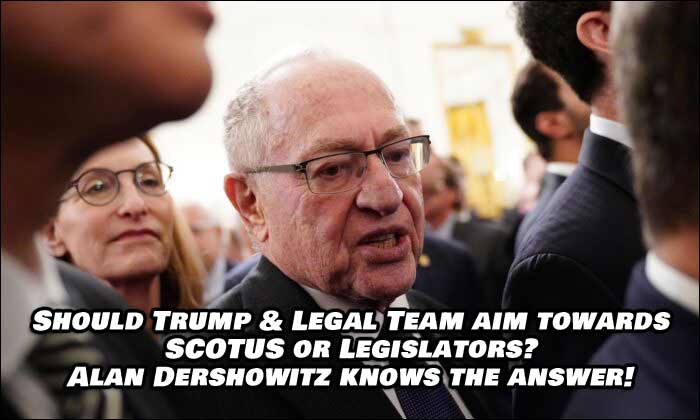 Lawyer Alan Dershowitz believes that the Supreme Court of The United States (SCOTUS) will decide NOT to hear the cases of voter fraud brought forward by Donald Trump and his legal team. Don’t worry though, because that just means that it is handed to the Legislature, and they get to pick alternative Electors. This past Sunday, December 7th 2020, Dershowitz stated that in his professional opinion, he thinks that SCOTUS most probably will assist in deciding on the fact if the state legislators actually have the power to pick alternate Electoral College electors. These newly picked electors would be the ones that would vote for President Donald Trump if legislatures came to the conclusion that there was voter fraud. This can happen even after an initial slate of electors has cast its votes on December 14th.

This interview took place on Fox News, who has strangely begun to lean way left. Fox News first asked Dershowitz what his thoughts were on the accusations made by Trump’s legal team, especially Rudy Giuliani. Giuliani has repeatedly claimed that ‘there was an obvious pattern of fraudulent activity that swayed the election in favor of Democrat Joe Biden’.

Dershowitz answered “There certainly is probably cause for investigating and looking further. Giuliani has made very serious accusations. The question is which institution is designed constitutionally to look into it? Is it the state legislature? Is it the courts? Is the clock running in such a way that there won’t be time to look into this?” … When he refers to ‘time running out’ he is probably referring to the Electoral College’s December 14th meeting, at which electors cast their Presidential votes.

Dershowitz continued, “The American public wants to know, is Giuliani correct or isn’t he correct. I don’t know whether we’ll find that out in time for the meeting of the Electoral College votes.”

Dershowitz said that the key question would be whether state legislatures, if they determine that significant voter fraud has indeed taken place, have the power to pick an alternate slate of Electoral College electors even after they have cast their presidential votes.

Asked if he thinks that, if it decides to take up the case, the U.S. Supreme Court would be likely to rule that it was unconstitutional for Pennsylvania to extend the deadline past Election Day for receiving mail-in ballots, Dershowitz replied, “I think so.”

“I think that there’s a 5-4 vote now in the Supreme Court and Justice Alito seemed to suggest that that would cancel out the votes in Pennsylvania that were received after the close of Election Day,” Dershowitz said. “Whether that’s right or wrong, that’s the way I predict the Supreme Court would decide the case if it decided to take the case.”

Opinions? Drop your comments below.