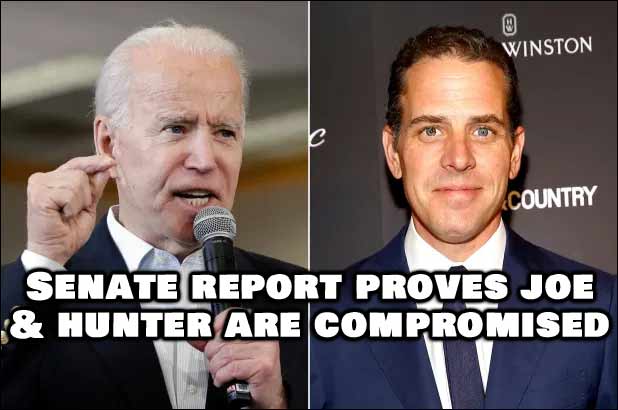 I don’t know how ANYONE would want Joe Biden as President of the United States, especially after reading this official Report by the US Senate Committee on Homeland Security, Governmental Affairs, and Finance. The documents clearly lay out how Joe Biden (and son Hunter) have 100% been compromised by foreign leaders and countries. According to the report and the fact that there is an active investigation, Joe Biden should have been ineligible to be certified in as POTUS. I’m not even sure if he was really ‘allowed’ to run as a candidate. However, as we just saw and learned, the Left can get away with just about anything so it doesn’t surprise me that this Senate Report was swept under the rug.

The report , which is titled ‘Hunter Biden, Burisma and Corruption : The Impact on U.S. Government Policy and Related Concerns‘, was prepared by ‘The U.S. Senate Committee on Homeland Security and Governmental Affairs’ and the ‘U.S. Senate Committee on Finance Majority Staff Report’. We have it linked as a pdf file down below, and get ready because it’s a long read, about 87 pages. … Even though the report is very in-depth, and quite descriptive, there are still people and agencies that did not respond or comply to document requests, so the report ends with this, “The Chairmen’s investigation has faced many obstacles from the minority and from executive agencies that have failed to comply with document requests. Accordingly, there remains much work to be done.“

There is so much damning information already in the report though, just one single paragraph near the end sums up just one aspect, “The records acquired by the Committees also show that Hunter Biden and his family were involved in a vast financial network that connected them to foreign nationals and foreign governments across the globe. Hunter Biden and Devon Archer, in particular, formed significant and consistent financial relationships with the corrupt oligarch Mykola Zlochevsky during their time working for Burisma, and their firms made millions of dollars from that association while Joe Biden was vice president and the public face of the Obama administration’s Ukraine policy. Rosemont Seneca Thornton, an investment firm co-founded by Hunter Biden, received $3.5 million in a wire transfer from Elena Baturina, who allegedly received illegal construction contracts from her husband, the then-mayor of Moscow. Moreover, Archer’s apparent receipt of money for a car from Kenges Rakishev of Kazakhstan while Vice President Biden was in Kyiv is especially concerning in light of the timing. And finally, Biden and Archer’s work with Chinese nationals connected to the Communist regime illustrate the deep financial connections that accelerated while Joe Biden was vice president and continued after he left office.“

The FULL PDF Senate Report can be found here … or here . … Thoughts? Feel free to drop your comments below.

Where is the origin of this document? Do you have a direct link?

Tamara. The link is at the bottom of the article. It says “The FULL pdf Senate Report can be found here. Click on here above in red font

Hold you finger on it

I just tried both links and they both work .. maybe try again? .. And there’s two different ones there at the end of the article.

Biden is not and will never be POTUS

Impeach biden and put him and his son in prison

Impeach all of them, they are not worthy of our Constitution, they are a disgrace to all of Americans and over seas.

They need to be charged for treason.
..just bring 1 person to justice & then the pyramid of corruption will collapse