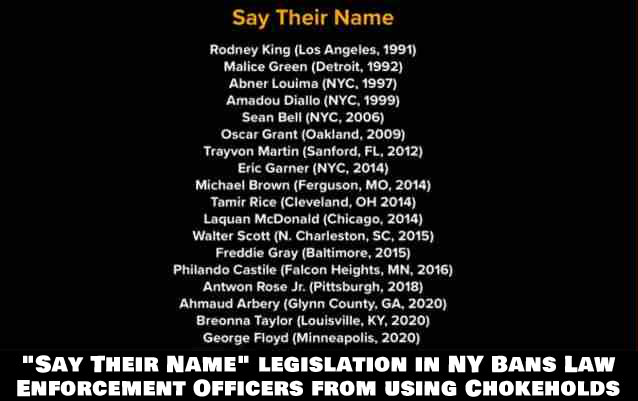 “Say Their Name” is credited to the victims of police-related incidents, including those names shown in the photo above.

NY Police Officers will now be banned from using choke-holds due to the proposed “Say Their Name” legislation mentioned just today by NY State Governor Andrew Cuomo. This new legislation was introduced in response to the continuing issues of police brutality, most recently the death of George Floyd. There are several new measures being introduced in New York state. Governor Cuomo did not give an exact time frame, but said that he sees the new legislation passing within the next week. He confirmed that he will work closely with NY State Legislature so that all the new policies are activated.

The list of policy priorities enhances earlier proposals in the immediate outcome of the killing of George Floyd and prior executive actions Cuomo has taken including appointing the Attorney General as a special prosecutor in matters relating to the deaths of unarmed civilians caused by law enforcement officers.

Governor Cuomo was quoted saying “Mr. Floyd’s murder was the breaking point of a long list of deaths that were unnecessary and abusive, and people are saying enough is enough, we must change and we must stop the abuse. Stopping police abuse vindicates the overwhelming majority – 99.9 percent – of police who are there to do the right thing. It restores the confidence, the respect, and the trust that you need to make this relationship work. You have to heal the police-community relationship for the sake of the police and for the sake of the community. As the progressive capital of the nation, New York should be at the forefront of this movement, and I want to work with the Legislature to pass these policy priorities next week to reform our systems and put a stop to this abuse once and for all.”

What do you think about this new “Say Their Name” Legislation coming to NY? … Please Comment Below.