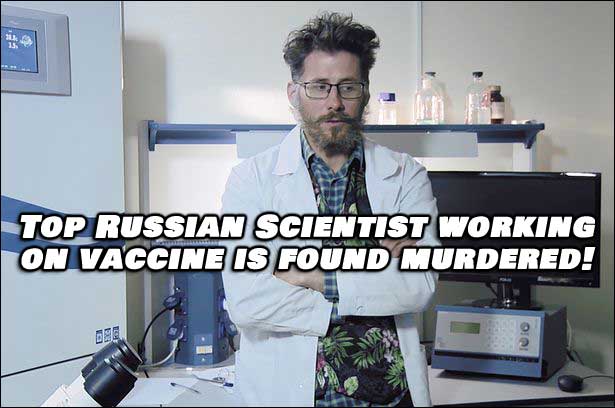 Alexander Kagansky was not only a Russian scientist, he was one of their top leading scientists and was presently working on a vaccine for COVID-19. However, his body was just located and was found to have multiple stab wounds from ‘sharp objects’. It also appears that his body had taken a very bad fall, probably the 14 floors he lived above in his high-rise apartment. So it appears as if he was stabbed, and then thrown or pushed from a window or balcony. There was definitely signs of foul play, and it all points to murder. (Source)

Kagansky was only 45 years old and had been working diligently on a healthy vaccine (one with a higher rate of Russia’s best vaccine, Sputnik-V, which presently is about 90-95% effective with no major side effects). His nickname was ‘Sasha’ which is what most people called him, and had moved to Russia back in 2017 where he did cancer research as an assistant professor at Vladivostok. His latest position put him as Director of the Center for Genomic and Regenerative Medicine. That facility is located in Russia’s Far Eastern Federal University and that is where Kagansky was performing his present vaccine work before he was found dead. E2News reported that there is a person of interest, who supposedly is a 45 year old biologist (yes, same age as victim) who recently paid a visit to Alexander Kagansky. What that ‘visit’ was about, we have no idea as of this moment. The investigation is on going …. But UNCONFIRMED rumors have already begun to circulate that Hillary Clinton may be involved in his death due to the RUMOR that before he was found murdered, he tweeted this statement “I have information that will lead to the arrest of Hillary Clinton.” (Although several sites have supposedly already debunked the Hillary Clinton side of the story as FALSE)

Do you think he was killed specifically because he was working on a vaccine? Did he know something that we don’t?? … What’s YOUR take? .. Please let us know in the comments below.