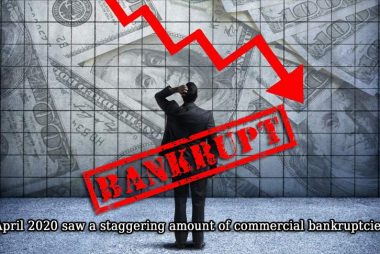 It’s reported that over 560 commercial Chapter 11 filings were processed in April 2020, a 26% increase from last year.

In what looks to be the largest retail casualty of the coronavirus pandemic, J.C. Penney has just announced it will be filing for Bankruptcy. What’s even sadder is that news like this makes the LEFT cheer. They are happy at the destruction of our economy. Why? All because it makes one man look bad; POTUS. This also makes you wonder that if large retail chains are going out of business, then what’s going on with privately owned ‘mom & pop’ stores? Why is it that Walmart can stay open, sell essentials in addition to clothes, BUT a ‘clothes only’ store owned by ‘ma and pa’ can’t open? If they would block-off the clothes section in Walmart, then that would be more fair to the small business owner, but they don’t. So you can literally go to Walmart, buy your ‘essentials’ and also spend thousands of dollars on clothes. But if you want to go out and support local small businesses, that small retail clothes store on the corner was told to CLOSE UP and STAY CLOSED until told otherwise. How is this fair to the private small business owners? It’s not, and the number of private small businesses that will fail and close this year will be astronomical. Yes, it’s also tough to hear that big chains are also closing up, but it’s the little, average American business owner that built this country, and continues to make it tick. Your local economy gets damaged when your local small businesses don’t do well. Also hit by the virus and forced to file for bankruptcy include Diamond Offshore Drilling, Frontier Communications, Gold’s Gym, Intelsat, J. Crew, John Varvatos Enterprises, Neiman Marcus, Stage Stores, True Religion Apparel, Ultra Petroleum, Virgin Australia and Whiting Petroleum. Companies that are getting close to a possible bankruptcy include Chesapeake Energy, Hertz, Lord & Taylor, Mohegan Gaming & Entertainment and Sur La Table. Right now it’s estimated that in April of 2020 alone, over 550 commercial Chapter 11 Bankruptcy filings have taken place. That’s an increase of over 25% from last year’s numbers. And again, the left is CHEERING. … COMMENT BELOW