Recounts in 30 States? Computer Glitch Says It May Happen!

Recounts in 30 States? Computer Glitch Says It May Happen! 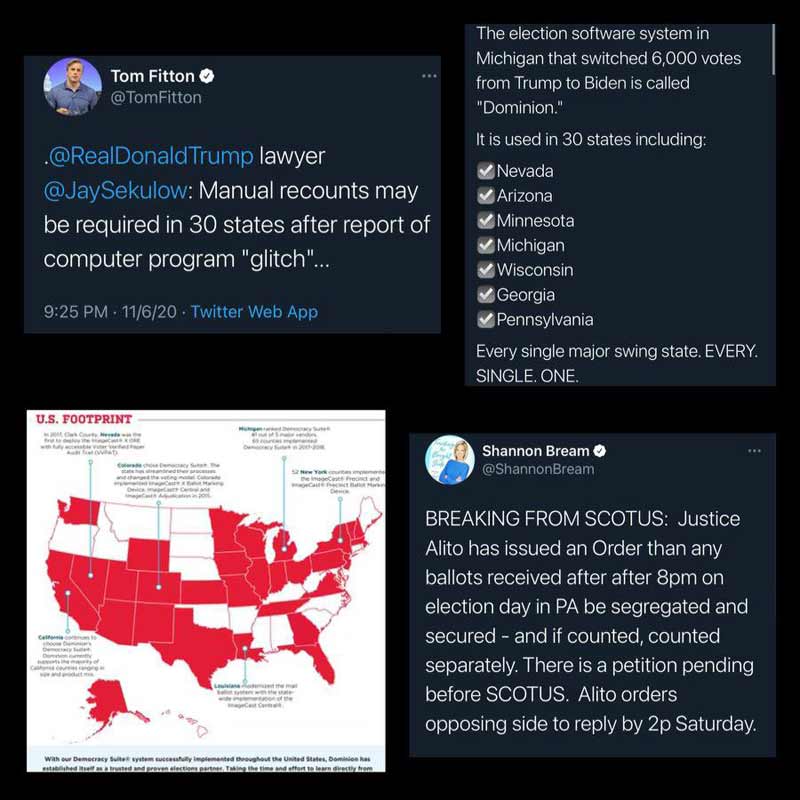 Recounts in 30 States? Computer Glitch Says It May Happen! (Click For Full Size)

The election software used in Michigan which has already proven to have have a ‘glitch’ that ‘switched’ approximately 6,000 votes from Trump to Biden, seems to have a very serious ‘glitch’. The software is called ‘Dominion‘ and it was used to count votes in 30 states. Some of the major states using the software include Nevada, Arizona, Minnesota, Michigan,Wisconsin, Georgia and Pennsylvania. What’s even more intriguing is the fact that Nancy Pelosi is somehow tied to Dominion Voting Systems. Supposedly the DC Lobbyist for the company Dominion Voting Systems is none other than Nancy Pelosi’s long time aide. The company hired Brownstein Farber Hyatt & Schreck earlier this year. Nadeam Elshami, Nancy Pelosi’s former chief of staff, is one of the lobbyists on the account.

Their ‘computer glitches‘ were first noticed in Georgia and it’s been found out that the same software system in Antrim County, Michigan had to reverse over 5,500 votes due to the same exact glitches. After that ‘glitch’ was fixed, it turns out that Donald Trump actually won the county by approximately 2,500 votes!!

Already in Pennsylvania, Justice Alito has issued an Order that any ballots received after 8pm on Election Day, should be separated from all other ballots. If they are counted, then they should be counted individually from all others. There is a petition pending right now before the Supreme Court of The United States. The ‘opposing side’ must reply by 2PM Saturday.

Realizing the same software was used in 30 states, there looks like there is going to be mandatory recounts in all those states. Hopefully that will flip more votes to Trump like it did in Michigan.

At this rate. I may get a great Christmas present. Merry Christmas. Go Trump.

Where there is smoke there’s fire! We have seen the dishonesty of the democrats for over 4 years. Why wouldn’t Pelosi be involved with this glich.

I pray God heals this nation. I hope all of the wrong doing is exposed and all involved are held to account. One Nation Under GOD!

I can only fray that CHRISTmas will send the real Americans a gift of love and correct this horrible sham those who HATE AMERICA keeps handing out to our great country and finally takes the necessary steps to restore dignity back to our REPUBLIC with sentences being handed out to all those democratic thieves who deserve their real day of Justice and not JUST US!!!! Nancy Pelosi, Adam Shitff along with those who had pissed on our Constitution deserve their day in Court. Screw that corrupt OBIDEN who know speaks about healing..What a dog he is along with the corrupt… Read more »

Hit the nail on the head!!!

How do we best “encourage” a full investigation and who would effectively report the findings to the American Public?

Honestly, what’s stopping these folks from voting our ass to the gas chamber? Or declaring all private land, businesses, mining, and agriculture property of the government? Their attacks on capitalism and middle class America resembles the communist uprising in Russia.

I am very happy to have found this news media; I have been kicked out of  FB, Youtube, etc, too many times and I have had to wait until they feel that I have learned a lesson of not to write in favor of President Trump, or uncover their lies. Ron, I have read your message and I know what you mean. I have thought about what you are saying; how can they change the rules when the game has already started? How can they get away sending out unsolicited millions of valets shortly before the elections? They had it… Read more »

This message was meant for Ron

Pelosi “fixed” these voting machines to work in Biden’s favor bc she’s an idiotic bitch!

Pelosi has rigged the election in Biden’s favor with her very own “glitches” with the voting machines bc she’s an idiotic, egotistical B*tch!

Someone in Larimer County voiced her concern in preparation election day early in person voting that her ballot was switched while she was watching it before she cast it. It was naysayed that day bit now I wonder how many votes were “switched” on both Trump and Gardner