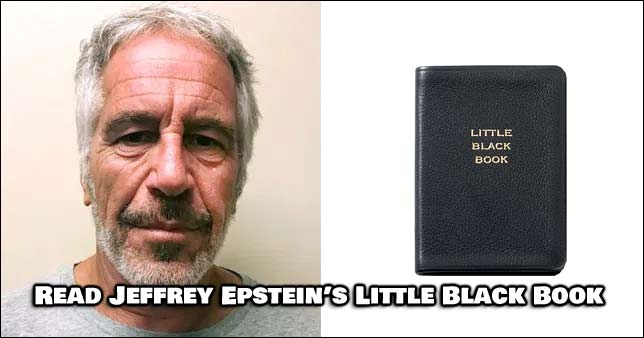 We have the full unredacted version of Jeffrey Epstein’s Little Black Book. Read it below!

When accused child trafficker Jeffrey Epstein wound up dead in his jail cell, it wasn’t quite a shock to be honest. They guy had information on a lot of very powerful people; in both politics and Hollywood/entertainment. Information that could do a LOT of damage to certain people. So, he somehow wound up ‘killing himself’ under some very strange circumstances while in his jail cell. He was awaiting trial on new sex trafficking charges, and he was going to take down a lot of big people. Unfortunately, whatever he had to say, died with him. While Jeffrey Epstein schmoozed with the best of them, he made some very powerful friends. Presidents, other huge political figures, the biggest names in Hollywood, sports figures and more. Although much of his private life was filled with an evil darkness. Horrible accusations eventually came from everywhere, and spanned decades. Sex Trafficking, Child Pornography, Child Sex Trafficking and more. A handful of people tried to step forward over the years, only to be shunned by the masses. Then we see the likes of Harvey Weinstein being taken down and it’s a whole new ballgame.

The accusations against Jeffrey Epstein, and his whole ‘sex’ empire are outright disgusting. While he interacted with a very wide range of people, we must question why some or most of them are associated with him. Some may just be innocent acquaintances, and some many know everything and even have participated. There’s pictures all over the internet of Jeffrey Epstein with just a plethora of different people; who knows which people know what.

What we have here is what is being referred to as the unredacted version of Jeffrey Epstein’s Little Black Book. There’s some HUGE names in there, along with their contact info, and it all seems legit. Enjoy perusing through it and let us know your comments below.

Interesting. Did not see Robert Downey Jr, or Katy Perry, or the Obamas or Clintons in the book at all. He was a billionaire so this could be a contact book or a general book for numbers. As a billionaire he would come in contact with many people. No, this is not me trying to dismiss anything or justify anything. This is just an observation. I look forward to hearing what Ms. Maxwell will have to say and hopefully we can star getting rid of the trash.

Clinton is there – contacts in his office are listed Bands, Doug for one

thank You, these are key documents for things to come, in France particularly