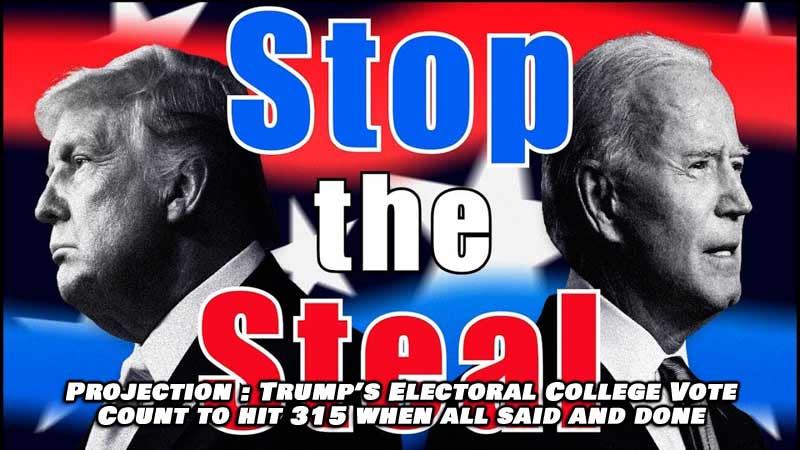 After all the recounts are over, after all the voter fraud is uncovered and removed, projections are clear, Donald Trump will come out victorious in the 2020 Presidential Elections, and will serve a 2nd term of 4 more years. Here’s how it works :

The U.S. election has attracted worldwide attention since voting began back on November 3. As Democrats manipulated the Dominion voting system to cheat on demand, they also flooded the system with illegal votes of the deceased, ghost votes, ballot destruction, burning votes and committed other voter fraud related crimes. They cheated so much that it appears as if Trump will flip over the election to his favor. America’s calling for the truth is growing increasingly louder.

Using comprehensive local & foreign media reports from recent days, the author of this article collated a timeline of how many votes President Trump is about to win due to the voter fraud committed by the Left.

On November 13th President Trump received a total of 229 after he won 15 electoral votes in North Carolina.

On November 20th, President Trump will win Georgia which gives him another 16 electoral votes, bringing a total of 248 votes. On November 14th, President Trump requested the Election Commission to verify the signatures on each postal ballot and leave the signature of voters during the registration process, matching voters and signatures one by one, which has further blocked the fraud loophole that Democrats continue to take advantage of. Earlier, Secretary of State Raffensperger had asked Georgia to conduct an audit recount because of the small gap in the total number of votes won; This is usually done automatically. Considering that a recount could also be wrought with fraud, President Trump requested to check and match signatures. As a result, Mr. Trump could take Georgia with no problem.

By November 23, President Trump will have won 20 more votes in Pennsylvania, and 16 more in Michigan, bringing the total to 284.

The speaker of Pennsylvania’s House of Representatives has called for ballots to be audited by the 20th and Segregated ballots are not counted (Ballots that missed the deadline). Now a Pennsylvania judge has ruled in favor of the Trump campaign, arguing that segregated ballots should not be counted.

Because there are 16 electoral votes in Michigan, has been the hardest hit by the Democratic Party’s frenzied fraud.

On November 30th, President Trump will take 11 electoral votes in Arizona, a total of 295 votes.

Online news Politico has reported that in Arizona, system data incorrectly showed that 98 percent of Arizona’s votes had been counted, but in fact, only 84 percent had been counted.

On December 1st, President Trump will take 10 electoral votes in Wisconsin and 6 in Nevada, bringing the total to 311.

Wisconsin has started their recount on November 15th, which ends on November 23rd. Sidney Powell, a lawyer for Mr. Trump’s team, said in an interview with Fox News that thousands of Democratic party fake votes would be eliminated because of cheating in the voting system. The gap between the two parties in Wisconsin is just over 20,000, so there is no question about Trump winning Wisconsin.

President Trump’s legal team in Nevada, after obtaining evidence from an in-depth investigation of postal ballots, made several allegations on the 12th. Note that Nevada may have experienced serious cheating and fraud, including dead votes and votes from non-residents.

If the Trump team’s lawsuit succeeds, winning Nevada’s 6 votes should not be a problem. While the state is traditionally blue, there presently is some uncertainty if it will stay that way. The Trump team has substantial evidence, and as long as there is no problem with the judicial system, Trump has a very good chance to win there.

On December 2, President Trump will take 4 votes in New Hampshire, bringing the total to 315.

New Hampshire, in the northeastern United States, was the first to go to the polls on November 3. Democrats currently lead in that particular state. However, according to Breitbart News report from November 10th, New England’s Democratic strongholds lost the 2020 election by surprise and its strong position has been weakened. This includes the state legislature turned to red, and Republicans ousted two state House speakers.

At the federal level, according to present numbers, Joe Biden won the state by seven percent points, and Democratic Senator Jeanne Shaheen easily retained her seat. In addition, the two congressional districts remained blue. Still, there was no similar follow-ups in the state election (YET).

(This Article only represents the author’s own personal view) …. Opinions? .. Drop your comments below.