President Trump Wants To Allow Russia to Return to The G7 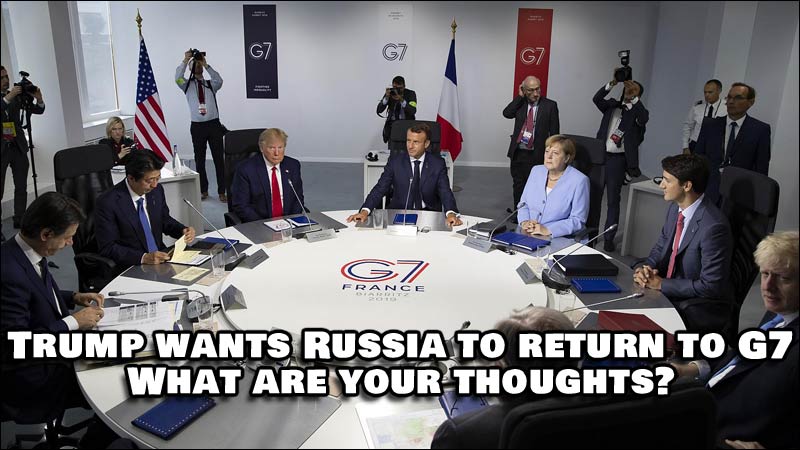 President Trump wants Russia back in the G7. What do you think about that? Comment Below.

President Donald Trump has expressed his desire to allow Russia to return to the G7. Canada and the UK however have expressed concerns over the idea. The G7, which stand for Group of Seven, in an organization concerned with international intergovernmental economics, and is made up of the top 7 (seven) biggest IMF (International Monetary Fund) advanced economies of the world. It includes the United States, the United Kingdom, Japan, Italy, Germany, France and Canada. Trump has recently shown his desire for allowing Russia to return to the G7, however that is not sitting well with everyone. Two of the largest proponents against this is Canada and the United Kingdom. Both have expressed their concerns. A spokesman for the UK Prime Minister Boris Johnson said he would veto any proposal to allow Russia to rejoin the group, unless the country completely halts its ‘aggressive and destabilizing activity.” Although neither the UK or Canadian position rules out Mr Putin’s attendance of the summit in the US. If President Trump invites Putin, then Putin can and most probably will come, although how the other representatives of the other countries involved will respond is not yet known.

Trump stated Saturday that he would postpone the G7 Summit, which was originally set to take place in June. He moved it back until September. President Trump referred to the G7’s countries as “outdated” and claimed Russia and others should now be included. The President also informed Russian President Vladimir Putin on Sunday of his plan to invite him to the Summit.

The G7 Summit is an annual hosted event (this year hosted by the United States) that includes the leaders of The United States, Canada, France, Germany, Italy, Japan and the UK to discuss matters of co-operation. Do you support Trump reaching out to get Russia involved? Let us know in the comments below.