President Trump shuts down spy app WeChat and TikTok is Next. 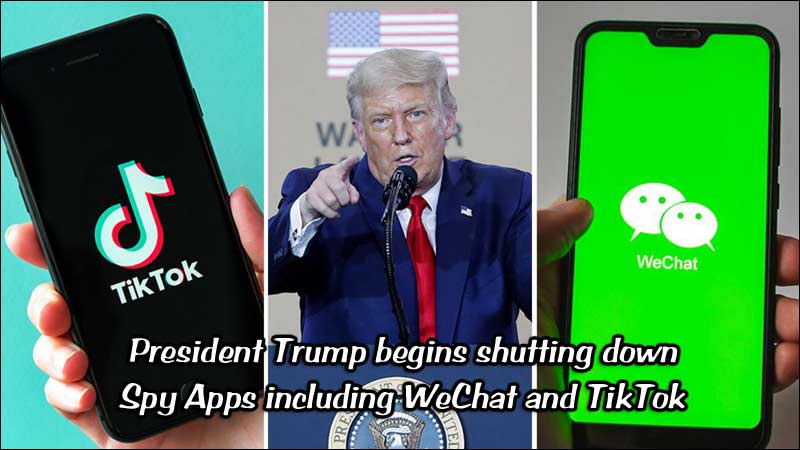 President Trump shuts down spy app WeChat and TikTok is Next.

President Trump has agreed to delay the shutdown of the popular video-sharing app Tik-Tok, but will proceed to shutdown WeChat. As of September 20, 2020, the WeChat app will be unavailable for download in the United States. President Trump banned the popular apps via an executive order on August 6, 2020 for persistent threats to national security, foreign policy, and the economy of the United States. But Oracle and Walmart stepped up to buy a 20% cumulative stake in Tik-Tok, assuring the president that it would meet the US administration’s security concerns.

According to whitehouse.gov, Tik-Tok, a wildly popular video-sharing program preferred by teenagers and young adults across the country, has reportedly been downloaded over 175 million times in the United States and over one billion times globally. The parent company, ByteDance, Ltd., is run by members of the Chinese Communist Party. They will continue to own 80% of the shares. Tik-Tok became a target of national security risk as it reportedly “captures vast swaths of information from its users, including Internet and other network activity information such as location data and browsing and search histories.” The US administration feared the data collection allowed the Chinese Communist Party access to Americans’ personal and proprietary information — in the U.S. it is illegal to sell data to third parties without the user’s consent. The U.S. administration argued that these apps allowed China to “track the locations of Federal employees and contractors, build dossiers of personal information for blackmail, and conduct corporate espionage.”

With 1.2 billion users on WeChat, the social media platform has become like “oxygen” for Chinese users, advocates claim, as it is a “super social media platform” inside China, and increasingly outside of China, including the United States. This caught the attention of President Trump who issued the order prohibiting the use of WeChat as well. The app is said to have 3.3 million monthly active users in the US, many of whom use it to communicate with family and friends in China.

Here’s what the Left won’t tell you!

Under President Obama, cyber-crime became the No. 1 transnational criminal enterprise in the world, surpassing drug trafficking, weapons trafficking and human trafficking. The reason, according to the U.S. Immigration and Customs Enforcement Cyber Crimes Center, is that transnational criminals have been increasingly using the internet to commit financial fraud, money laundering, identity and benefit fraud, the sale and distribution of narcotics and other controlled substances, illegal arms trafficking, the illegal export of strategic and controlled commodities, and child exploitation. An article in the Washington Post confirmed the alarming threat that cyber-crimes posed to U.S. security elections. .

While President Obama brought attention to this dilemma and outlined his domestic policies in combating cyber-crimes in the United States, (Read here), his transnational organized crime war was largely regional in scope, placing most of his energy on the US financial systems and not on the individual user. The global cost of cybercrime has now reached as much as $600 billion — about 0.8 percent of global GDP. According to the think-tank Center for Strategic and International Studies in Washington, D. C., there have been no signs of the economic impact of cyber-crime slowing down. According to fbi.gov, “our adversaries look to exploit gaps in our intelligence and information security networks. The FBI is committed to working with our federal counterparts, our foreign partners, and the private sector to close those gaps. These partnerships allow us to defend networks, attribute malicious activity, sanction bad behavior, and take the fight to our adversaries overseas.”

President Trump has stepped up the war against cybercrime. On February 9, 2017, President Trump signed the Cybercrime Bill into law, creating the National Computer Forensics Institute, a federally-funded training center in Hoover, Alabama, dedicated to probing digital evidence for electronic crime cases. Later that same year, on May 11th, President Trump signed Executive Order 13800, “strengthening the cybersecurity of federal networks and critical infrastructure.” On September 20, 2018, he extended the executive order by unveiling his National Cyber Strategy initiative.

His dedication to “identify, counter, disrupt and degrade” cyber actors led us to where we are with Tik-Tok and WeChat. Our president has always made it clear that we must preserve peace through strength.

“The American people expect our Nation to be a world leader on every front, including cyberspace,” President Trump declares. “The prosperity and security of our people, and the preservation of our way of life, depend on our successful execution of this strategy.” … Drop your Comments Below.

Author Frances Newman is a writer with a Master’s Degree in General Theology from Fuller Theological Seminary and a B.A. in journalism from New York University.

Thank you for another excellent article, Frances. I’m so glad we have President Trump looking out for our security. We have had enough problems as a result of the Chinese government this year. It seems they are determined to destroy us any way they can.