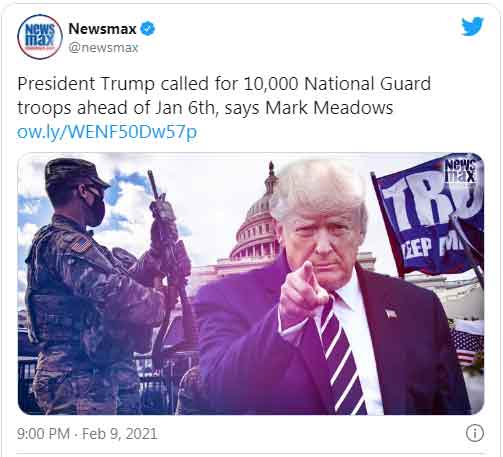 Well, well, well. Look what we found. Someone uncovered the fact that BEFORE January 6th and the ‘breach’ on the capitol building in Washington, DC, President Donald Trump attempted to make that fateful day (the 6th) as SAFE AS POSSIBLE. He, as President, ordered 10,000 troops to Washington DC for security purposes. That request was DENIED / REFUSED by the DoD (Department of Defense). Former White House chief of staff Mark Meadows was interviewed on “Sunday Morning Futures”, which is a Fox News segment, and stated “although Trump had been an advocate about offering Capitol Police and National Guard presence at the Capitol several times last month, his offer was censured ‘every time’.” Fox News’ Maria Bartiromo question him further and Meadows replied “We also know that in January, but also throughout the summer, that the president was very vocal in making sure that we had plenty of National Guard, plenty of additional support because he supports our rule of law and supports our law enforcement and offered additional help. Even in January, that was a given, as many as 10,000 National Guard troops were told to be on the ready by the Secretary of Defense” Meadows said. “That was a direct order from President Trump and yet here is what we see … all kinds of blame going around but yet not a whole lot of accountability. That accountability needs to rest where it ultimately should be and that’s on Capitol Hill.“ 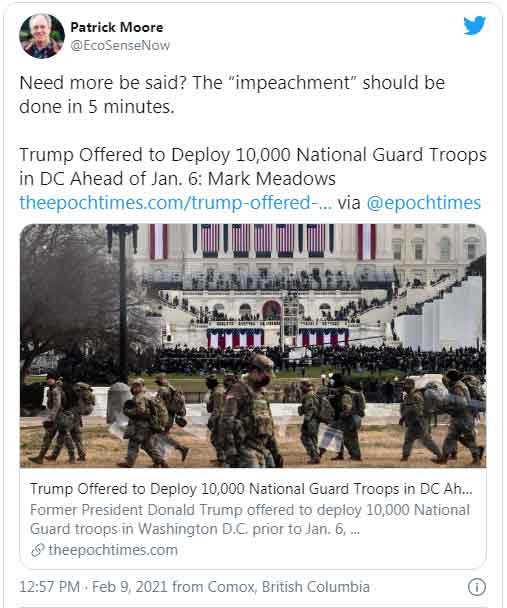 Tweets in support of ‘dropping’ the impeachment charges due to this fact began to pop up. Patrick Moore (@EcoSenseNow on Twitter) tweeted “Need more be said? The impeachment should be done in 5 minutes. Trump offered to deploy 10,000 National Guard Troops in DC ahead of January 6th.“. Newsmax also tweeted “President Trump called for 10,000 national Guard Troops ahead of Jan 6th, says Mark Meadows.“

When you really look at the entire situation from a distance, it appears as if the ONLY one that was concerned with making the area safe that day was President Trump himself. He was the one that made the request for 10,000 National Guard Troops. It was the deep-state DoD that DENIED his request. This news shatters the impeachment reasoning. …. Thoughts? Feel free to drop your comments below.

That alone right there should tell you that Donald Trump is innocent of all charges. I am curious to know who denied that request!! I’m guessing Pelosi but I’m sure there is quite a bit more responsible for that. This entire Impeachment is a joke and you all know it. You are making yourselves look like fools to this entire nation. You are all lying, cheating crooks and the American people know it.

I sure hope his request for troops for January 6th is made an important point by his defense team. If this can be proved, it should close down the whole faux impeachment trial.

As I have watched the electoral process in action, this time in particular, I am appalled.; at the corruption and propaganda flung carelessly about by the media and the political party of the democrats in particular. Not that the republican party is perfect HOWEVER, PRESIDENT TRUMP…. HAD HAD TO DO HIS VERY BEST TO RUN AN ENTIRE COUNTRY….FOR FOUR YEARS….WITH CONSTANT…UNEQUIVICABLE…AND UNCANNY… ATTACKS ON HIS PATRIOTISM…ETHICS….CHARACTER…AND….PERSONALITY. FINE. YOU DON’T LIKE IS VERBIAGE. GET OVER IT! The way I see it. AND I SEE IT! CONGRESS. THE SENATE. PELOSI AND SHUMER IN PERTICULAR AS WELL AS A FEW DIZEN OTHERS I… Read more »