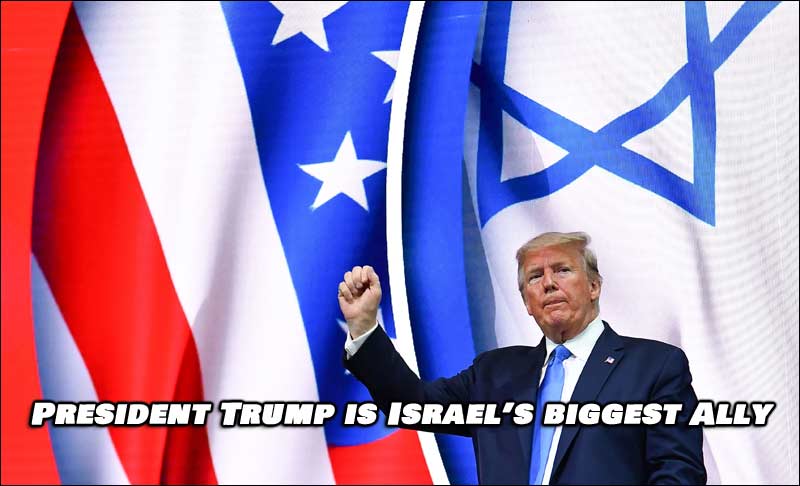 There’s no doubt that President Trump is Israel’s biggest ally and friend.

President Trump is Israel’s biggest ally and friend. No other President has done more for US/Israel relations. These are 39 of his greatest accomplishments when it comes to Israel:

Summary: President Donald Trump took office promising to reverse the most anti-Israel policies in U.S. history from the Obama-Biden Administration and rebuild the U.S.-Israel relationship to ensure it became stronger than ever before. The Trump Administration has fulfilled this promise.

1. The U.S. committed to stand with Israel at the U.N. after President Obama refused to veto and facilitated the passage of U.N. Security Council Resolution 2334 betraying decades of bipartisan policy to defend Israel against biased, anti-Israel resolutions.

3. President Trump became the first sitting U.S. President to visit the Western Wall in the Old City of Jerusalem on May 22, 2017.

4. The U.S. decided to withdraw from the United Nations Educational, Scientific and Cultural Organization (UNESCO) on October 12, 2017 after adopting resolutions that attempted to deny the historic connection of the Jewish people to Jerusalem and Hebron.

5. The U.S. recognized Jerusalem as the eternal capital of Israel on December 6, 2017 and began the process to move the U.S. Embassy from Tel Aviv to Jerusalem.

6. The U.S. vetoed a resolution at the U.N. Security Council (UNSC) on December 18, 2017 that sought to condemn the U.S. decision to recognize Jerusalem as Israel’s capital and intention to move the U.S. Embassy from Tel Aviv to Jerusalem.

8. President Donald Trump signed into law the Taylor Force Act on March 23, 2018 prohibiting U.S. funding to the PA until it stopped paying salaries to Palestinian terrorists and their families incentivizing and rewarding such violence.

9. The U.S. left the disastrous Iran nuclear deal on May 8, 2018 and began a maximum pressure campaign against Iran that also reaffirmed Iran must never get nuclear weapons.

11. The U.S. announced its decision to withdraw from the United Nations Human Rights Council (UNHRC) on June 19, 2018 because of its failure to defend human rights or hold actual human rights abusers accountable, while engaging in anti-Israel bias.

12. The U.S. announced on August 6, 2018 new sanctions on the Iranian regime including re-imposing nuclear-related sanctions that were lifted under the Iran deal.

13. The U.S. announced on August 31, 2018 it would withhold funding to the UN’s Relief and Works Agency for Palestine Refugees (UNRWA) for its anti-Israel operation that exacerbates the Palestinian refugee crisis.

14. The U.S. announced on September 10, 2018 it would close the Palestine Liberation Organization (PLO) office in Washington, D.C. in compliance with the law for its illegitimate anti-Israel actions at the International Criminal Court (ICC).

15. The U.S. announced on November 5, 2018 sanctions on the Iranian regime, including re-imposing of the remaining non-nuclear related sanctions lifted under the Iran deal.

16. The U.S. announced on March 3, 2019 the merger of U.S. Embassy Jerusalem and U.S. Consulate General Jerusalem to form a single diplomatic mission.

20. U.S. Ambassador to Israel David Friedman and U.S. Special Representative for International Negotiations Jason Greenblatt attended a historic event at the City of David, the archaeological site of ancient Jerusalem, to mark the discovery of the Pilgrimage Road representing the most significant half-mile in the world for Judeo-Christian heritage.

21. The U.S. hosted its annual Independence Day celebration for the first time in Jerusalem on July 2, 2019.

22. The U.S. supported on August 15, 2019 Israel’s decision to enforce its laws denying entry to Reps. Rashida Tlaib and Ilhan Omar’s trip for supporting BDS against Israel.

24. The U.S. condemned on November 13, 2019 the European Court of Justice decision on labeling for certain Israeli products facilitating BDS against Israel.

25. The U.S. reversed the Obama Administration policy on November 18, 2019 and declared Israeli settlements in the West Bank are not per se inconsistent with international law.

26. U.S. Ambassador to Israel David Friedman became the first U.S. Ambassador to Israel to visit the Western Wall in the Old City of Jerusalem with the Prime Minister of Israel, Benjamin Netanyahu, on December 6, 2018. They were visiting the Western Wall on the one-year anniversary of the United States recognition of Jerusalem as Israel’s capital and to light candles marking the fifth night of Hanukkah.

27. President Donald Trump signed an Executive Order on December 11, 2019 to combat anti-Semitism and discrimination against Jewish students in educational institutions.

28. The U.S. killed Qassem Soleimani on January 2, 2020 who led the Iranian regime’s Islamic Revolutionary Guard Corps and its Quds Force.

29. Vice President Mike Pence visited Israel and spoke at the Fifth World Holocaust Forum on January 23, 2020 to mark the 75th anniversary of the liberation of Auschwitz. 30. The U.S. announced its “Peace to Prosperity: A Vision to Improve the Lives of the Palestinian and Israeli People” on January 28, 2020 to facilitate a peace agreement.

31. The U.S. condemned the UN Human Right Council’s (UNHRC) publication of a database of companies operating in Israel and Israeli-controlled territories on February 13, 2020 and called upon states to reject this effort to facilitate BDS against Israel.

32. President Donald Trump signed an Executive Order on June 11, 2020 that require the imposition of sanctions to defend the U.S and Israel from illegitimate ICC actions.

33. The U.S. hosted a historic ceremony on September 15, 2020 to sign the Abraham Accords, the normalization of relations and peace between Israel, the UAE and Bahrain.

35. The U.S. announced on September 11, 2020 it brokered a historic diplomatic breakthrough that Israel and the Bahrain agreed to full normalization of relations.

36. The U.S. hosted a historic ceremony at the White House on September 15, 2020 to sign the Abraham Accords representing the full normalization of relations and peace between Israel, the UAE and Bahrain.

38. The U.S. has consistently condemned Palestinian terrorism against Israel, demands the terrorist organization Hamas return Israelis being held in Gaza, supports Israel’s right to defend itself, provides Israel with $3.8 billion in military assistance per year, and reaffirms its commitment to preserving Israel’s Qualitative Military Edge (QME).

39. The U.S. announced on October 23, 2020 it brokered a historic diplomatic breakthrough that Israel and the Sudan agreed to full normalization of relations. (3rd Israeli / Mid East Peace Deal brokered by President Trump)

Anyone that thinks Donald Trump is antisemitic is most definitely quite ignorant. … Have an opinion? Drop your comments below.