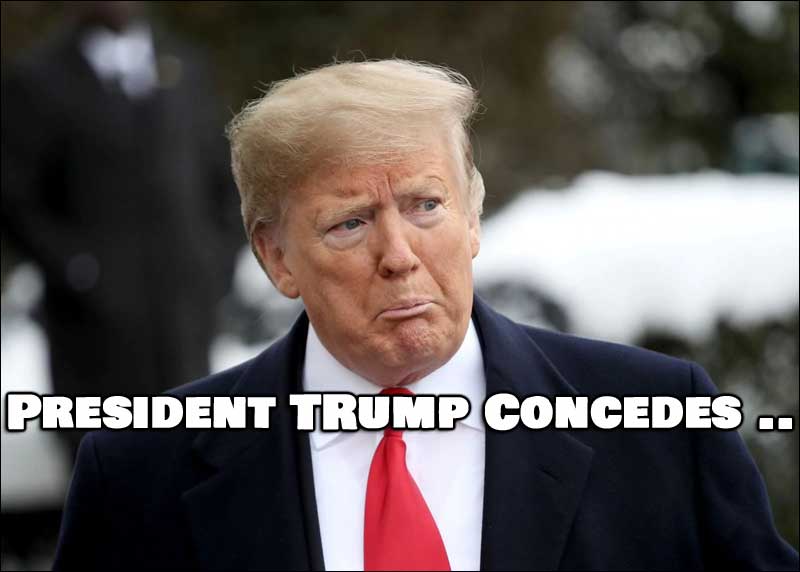 PRESIDENT TRUMP CONCEDES NOTHING! .. What, you really think Trump and his die-hard supporters would just lie down and roll over? .. Think again. *Trump did reiterate what he said weeks ago, that the transition for Biden would be smooth, however he did NOT concede. Inauguration day is January 20th, which is still 2 weeks away.* Between the HOURS of Rudy Giuliani and the Legislator Hearings, the press conferences and lawsuits brought forth by Sidney Powell and Lin Wood, the objections from a few brave Republican Senators and Congress-members, the Dominion Voting Software, the multitude of live real time videos of election cheating, many sworn testimonies from poll counters, watchers and people in official positions (look this all up, there’s TONS of proof if you just take the time to look for it, unlike anyone on the Left is wiling to do), there is NO WAY IN HELL that President Donald J. Trump is going to concede anything! At least 6 (six) states (possibly 7) are being contested, and the Senate is already a bit into their 2 hour discussion on Arizona which happened to be only the 3rd state they got to today (it’s going in alphabetical order). Each remaining contested state will also have a 2 hour discussion among Senate members (Georgia, Michigan, Nevada, Pennsylvania, Wisconsin; and possibly New Mexico)

Has Trump taken a blow or two to the gut? Sure, even more than that I would say. But the man just about ALWAYS comes through. He held a LOT of campaign promises, even when opposition stood in his way non-stop. Was today’s violence in DC Trump’s fault, like every single Leftie is saying? Of course not. We did our research and already know that Antifa was bused in. We know they have been identified as the instigators, even though you will never hear this from any main stream media outlet. We will do another article with pictures, images and other information we have collected that show Antifa had infiltrated and then initiated the violence .. NOT the true patriotic Trump supporters that the entire Left and Media are blaming.

I came to shout bull shit and find I don’t need to.

I’m with you Roger. God Bless Donald Trump and give him the strength to complete his plan to save our Republic. Most Americans are complacent to wonders of this country. They have become so accustomed to its freedoms. By the grace of God may the worthy truly wake up. Many of us just don’t know how to help. We pray. Thank you Donald Trump and may God keep you safe, healthy and strong.

Let’s prey that our president got this all together,

I agree. President Trump has a plan, and we should all support him any way we can!

GOD is still on the THRONE… GOD is in CHARGE… GOD knows all and he does see all… GOD will avenge us of our adversaries… GOD will call the DEMONRATS out by name and they will run and hide in fear. GOD is not slack in his ways therefore every knee shall bow and every tongue shall confess that he is LORD and KING and we shall be by his side when the battle is no more so my fellow AMERICANS, FEAR NOT for GOD does not give the spirit of fear, but of peace, love and a sound mind…… Read more »

If Trump deploys the military to every major city in all states the left would call him a dictator, fear monger, and you know about every other name in the book so how do you get the military to have a presence in every major city in the USA without an uprising? You brilliantly do what Trump is doing right now. You see early on because you have the play book and know BLM and ANTIFA members dressed like MAGA fans and infiltrated the capitol bldg. He saw it coming so he adds a spec op team to take some… Read more »

I’m waiting til Jan 20 when all the left asswipes are huddled together in one place ; President Trump takes the podium and enacts Insurrection EO (Sept18, 2018) thereby declaring Martial Law and having them rounded up, arrested and from marched out !!!!

A SERB FROM SERBIA
Reply to  JIM MCCANN

No time to wait, prepare as if he won’t do anything. Think all of it through. Perhaps afterwards there’ll be no time to do it.

We need cannabis to be fully legalized. Big Pharma needs to die already.