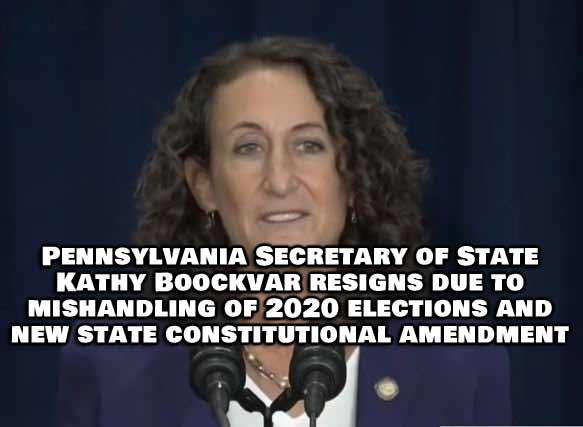 Kathy Boockvar, who is Pennsylvania’s Secretary of State, will no longer hold that position after February 5th, 2021. Boockvar is resigning at the urges of Governor Tom Wolf due to two major ‘scandal’ issues. Even though these 2 issues have recently come to light, she’s worked in that department for over 3 years, so who knows what else she has done during that time. Her resignation just so happens to come right after endless negative judgments were made about her handling of 2 major issues. Those two issues include her handling of the 2020 elections, which she was sued for by Trump’s 2020 campaign, and the way she managed the new state constitutional amendment that has to do with child sexual abuse victims. What exactly did she do that was so wrong??

Well, the Pennsylvania State Constitution specifically states that “all amendment proposals must be accepted twice by the state legislature in Harrisburg.” It goes on to say “The secretary of state must publicize the proposed amendments in at least two newspapers in each of Pennsylvania’s 67 counties before the next vote takes place.” .. Here comes the BIG BUT, lol, BUT that is not what Kathy Boockvar did. She did NOT follow the constitutional instructions, she failed in her duty as Secretary of State. She did NOT make anything public that had to do with the amendment on child sexual abuse victims. She did accept responsibility though, she stated “I’ve always believed that accountability and leadership must be a cornerstone of public service. While they only became aware of the mistake last week and immediately took steps to alert the administration of the error. I accept responsibility on behalf of the department.“

The failure to publicize the constitutional amendment was not the only issue that finally resulted in her resignation. Boockvar herself was at the center of the alleged (we all know it DID happen) voting inconsistencies that took place in Pennsylvania during the 2020 elections. Don’t forget that it was both Governor Tom Wolf and Secretary Kathy Boockvar that took the route of going around the Pennsylvania state legislature to accept the mail-in ballots that arrived up to 3 days AFTER the November 3rd voting deadline. They also counted ballots that had no postmarks at all, and did not do any signature matching, which was the standard that all previous elections had followed.

Lets hope she and Tom Wolf also end up wearing Orange at a certain holiday place on Cuba.

She’s taking the fall for the governor

I have waited for the explanation of why unconstitutional ballots can be counted in a federal election. The Constitution disqualifies them on its face.

So she let the communist Joe Biden into our White House to ruin this country. Did she have to pay back the money she got for letting Biden steal the election?

Personally I think she and Wolf behaved treasonous you & with a foreign country and did it intentionally and with malice to help take over our nation. Pre planned to hurt our Nation. They should be charged with treason. But , just like the attorney that got probation for CHANGING THE VERY WORDS IN A FISA WARRANT , they’ll probably get off Scott free.

So they admit there was voter fraud & yet Trump was condemned for saying there was! With this admission why are we now under democratic control? All states should have to recount the legitimate votes! I’ll never vote again. It’s all rigged!

You do that you let them win.
Rigged or not we have to assert our right to vote.

The Left is HOPING IT IS EASIER TO ASK FOR FORGIVENESS than give up power.