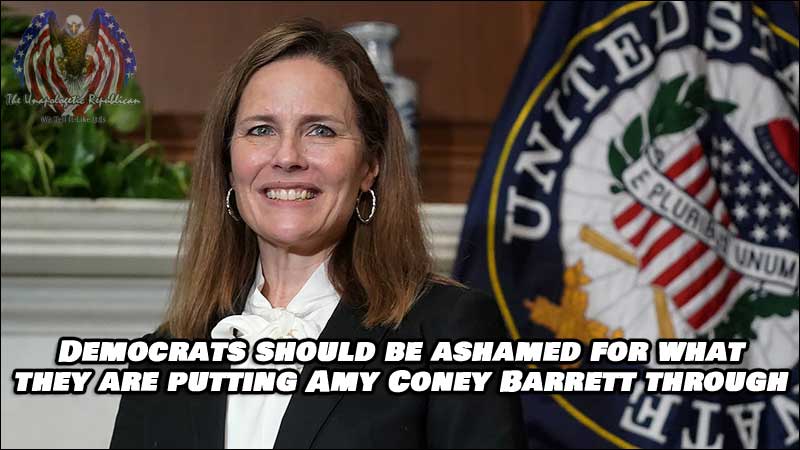 Our Democratic Leaders are Disgusting Human Beings for what they are putting Amy Coney Barrett through.

It’s now day 4 of the Senate Committee Hearings of SCOTUS Nominee Amy Coney Barrett and we’ve again seen the nasty side of our Democratic political leaders. While this hearing process is supposed to be a bipartisan attempt to asking questions to vet an incoming SCOTUS nominee, the entire Left (just about every single Democrat) has attacked ACB over things that should not have even been brought up in these hearings. Dozens of questions concerning her faith as a devote Christian, attacks on her 7 children, including the 2 children she and her husband adopted and happen to be Black. Democrat Senator of Hawaii Mazie Hirono asked if she has ever committed sexual assault, “Since you became a legal adult, have you ever made unwanted requests for sexual favors or committed any verbal or physical harassment or assault of a sexual nature?”. Corey Booker asked her “So you condemn White Supremacy?’ when he’s well aware that she adopted and is raising two black children. The PC Police gave her hell when she used the term “sexual preference,” instead of “sexual orientation.”

Democrats are saying the process is ‘illegal’ for Trump to do at this time due to how close the elections are, but they had no problem stating the complete opposite when Obama himself did it (See Video Below). You can play videos side by side of each Democrat contradicting themselves on the subject depending on who was President at the time. It was OK for Obama to do it, but it’s illegal for Trump to do it. Hypocrisy at it’s finest.

‘I made it absolutely clear that I would go forward with the confirmation process as chairman even a few months before a presidential election,’ Biden said in 2016, adding that the Senate has a ‘constitutional duty’ to fulfill the vacancy on the court. Shortly after RBG’s passing, and borrowing a popular Obama phrase, he said, ‘Let me be clear: the voters should pick a president, and that president should select a successor.’

Sen. Chuck Schumer was also on the record numerous times in 2016 calling for the Senate to ‘do its job’: ‘In order for justice to remain a pillar of this nation we must have a functioning judicial branch. The #SCOTUS must have nine.’ Speaker Nancy Pelosi similarly said, ‘The American people expect Merrick Garland, the President’s nominee, to be given a fair hearing and a timely vote in the Senate. The Senate should do their job.’

End the sham of a ‘hearing’ and put it to Vote already. There should be enough Republicans to vote her right in. … Opinions ?? Drop your comments below.

I agree, put it to a vote and then pass an amendment that there can only be a maximum of 9 Supremes so nobody can ever threaten to pack the court again.