Oregon, The State of Pretenders and RINOs

Oregon, The State of Pretenders and RINOs
written by Tracie Dugan 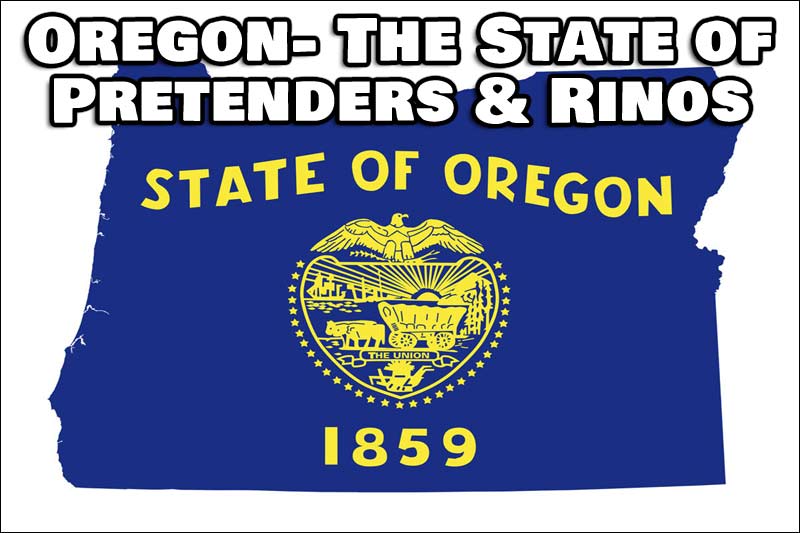 Oregon, The State of Pretenders and RINOs. Where Republicans act like Democrats and Liberals.

The Democratic roots run, control and ruin everything they are involved in. Case in point, Oregon has wolves in sheep’s clothing pretending to be Republican, but are really closet liberals (Some of us refer to them as RINOs; Republican In Name Only). Knute Buehler is one name that stands out. He has now participated in two elections running for Governor. Once in 2014, and now again in this year’s 2020 election against Democrat Kate Brown.

Timothy Boyle, who is the CEO of Columbia Sportswear, constantly bashes President Donald Trump and is also a known Nancy Pelosi supporter, donated $30,000 to the campaign of Knute Buehler back in 2014. That should be enough for a red flag, but add to it that he also donated $100,000 to the Hillary Clinton Victory Fund back in 2016. The list of his donations should tell you everything, and here you can find a list of all his 2016 election donations HERE.

On a different note, Oregon mail-in voting has been a problem for a while now. Back in 2016, 10 (ten) individuals pleaded guilty to Voter Fraud during the 2016 election. The convictions represent only a tiny fraction of the 2,051,448 votes cast in that election, in which Oregon voters elected Democratic Governor Kate Brown and chose Hillary Clinton over Donald Trump for President. In September of 2017, the Oregon Department of Justice started looking into additional cases after the Oregon Secretary of State’s office forwarded 56 incidents of possible voter fraud. However, Republican Secretary of State Bev Clarno at that time said our voting systems are very secure. Governor Kate Brown reiterated the same thing, but something is not adding up. How can they firmly say that the voting systems are secure, when there are known convictions of voter fraud right under their noses? Ignorance surely must be bliss. Although it’s not really ignorance, it’s arrogance. Ignorance means you were unaware and it was done by mistake. Arrogance means they KNOW IT, but will not acknowledge it. Also realize that Oregon is a Sanctuary State and presently is home to over 130,000 illegal immigrants, which also opens the door for their illegal votes. (interactive map of United States and how many illegals live there can be found HERE.

I personally tried reaching out to members of the Oregon Republican party, but received no help at all, other than a bunch of ‘run-around’ excuses why they won’t get involved and/or speak up. This even furthers my belief that our Republicans might not be who they say they are. They are NOT representing our core values. I will not give up though; I will continue to try and make contact. In general, Republicans that find themselves within Democratic states need to be more assertive. This will help turn the tide in making our states Red. Next I’ll be trying to reach out to Bill Currier, the Chair Of Oregon Republican party. I will give an update when this happens. …. COMMENT BELOW.