I found this ‘open letter‘ that a local NJ small business owner wrote to NJ’s extremely liberal Governor, Phil Murphy. It definitely hits the nail on the head, but will the Governor listen? .. We think not. Murphy is an extreme Liberal who is impossible to work with, and his actions prove it. … Here’s the letter word for word : 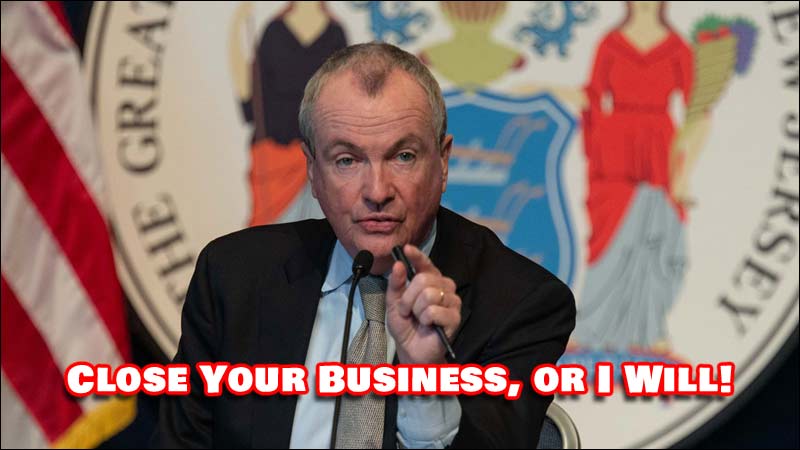 NJ Governor Phil Murphy is basically telling small business owners to ‘Close Your Business or I Will!’

My wife and I own and manage a small business in NJ that provides income for ourselves and our young children, as well as 17 employees and their families. We voluntarily decided on March 14 to shut down, one day before your mandate to do so. We wanted to protect our employees, our customers, and ourselves. We have not agreed with you at every turn but we respected the tough position you were put in and the choices you made early on. We’ve very willingly done our part, and we have waited. First, you assured us that we were helping to flatten the curve so that we didn’t overwhelm our healthcare system. When that goal was accomplished with overwhelming success, you moved the goalpost to “2 weeks of declining numbers” before we can start to open up NJ. On April 3, NJ Covid 19 new case statistics peaked, and April 17th marked 2 solid weeks of declining new cases in NJ. On April 30th, the number of deaths peaked, and May 14th marked two weeks of declining, and very substantially lower numbers of deaths. Governor, you moved the goalpost time and again along the way with no definitive criteria for exactly which businesses could open, or a timeline as to when. Meanwhile good people are waiting for an indication that their elected official has a modicum of concern for the well being of a large part of the state population – the small business owners and their employees. Adding insult to injury, your rhetoric indicates that ever-more testing, hundreds of millions of taxpayer dollars for contact tracing, a cure, and finally a vaccine, will be the only thing that might motivate you to relinquish your strangle–hold on the very throats of many of the NJ residents you are supposed to be serving.

Your hesitation may have been understandable when we didn’t know the numbers. Today that can no longer be a legitimate claim. In addition to a lack of substantial danger, demonstrated by the raw numbers, there are increasing studies and authoritative opinions from subject matter experts that support the same conclusions. The CDC itself, as well as multiple scientific studies, tell us that the mortality rate of Covid 19 is BELOW 0.3%, a far cry from the 5.0% that we thought we might have been dealing with at one time.

Our story is only one among thousands of business owners, and millions of people – we are shouldering $30k per month of overhead for which our only relief is to get back to work or we will go bankrupt and lose everything. There are no “essential” or work from home jobs we can apply for that would allow us to cover such massive overhead. So you have put us in a very bad situation – one of survival for ourselves and our children. Still, we have been respectfully waiting. We are watching as you flex your power over people just like us, with similar stories to ours. You are creating desperate situations with good people who contribute to society by creating businesses that in turn create jobs, people who need to feed and protect their families, and people who believe they are afforded the freedom to do so because of the many sacrifices that have been made by their ancestors who came before them. You appear to believe your actions are justified, however you need to understand that YOU have created the desperate and unfair situations that are leading to people defying your orders. You are turning good people into bad. Law abiding citizens are being suddenly marked as criminals not because of their actions, but because of yours.

Mr. Murphy, you sir are the elected Governor of a State of nearly 9 million people, in a country where we have a representative government of the people, for the people, by the people. You are expected to lead, but to be clear we did not empower you to rule over us like a monarch or direct our affairs at a granular level of detail. We elected you to run the business of the state responsibly and with consideration for all citizens. And in extreme circumstances like these, we have given you respect, due consideration, and extreme latitude to act decisively. Our expectation however, in this extreme situation, is that your actions be based on reason, statistical analysis, science, and logic. As of at least the past several weeks, your actions have fallen short of those expectations and look suspiciously to be based upon other motives. As you reacted flippantly today to people protesting in Point Pleasant Beach, you claimed yourself again that you are guided by science and statistics, yet you continue to ignore all indicators of the obvious – that it is safe and it is time to open. We have no interest in political games or any other motives you might secretly harbor. By closing voluntarily even before you mandated it, we demonstrated our ability to make responsible decisions, and like most businesses, we are highly capable of executing on the new operational practices we put in place that will keep our customers safe – in fact our largest motivator is our customers, and our reputation depends on us doing the right things. We ask simply for the same respect and consideration that we have given you. We have put ourselves in your shoes. Now we ask that you put yourself in ours, and we demand you do the right thing for NJ’s small businesses, for our employees, and for all of our citizens: Open NJ without further hesitation. Sincerely, Mark Milan … …. What do YOU think? .. COMMENT BELOW.

All I know is that I did not vote for that moron.

hey is and ass hole

I think this is respectful and well thought out. Much more respectful than I could have been. Hopefully a copy sent to Barr as well.